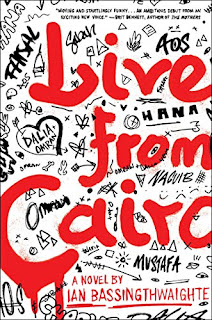 The protests in Tahrir Square are unfolding, Mubarak is out of power, at least physically, and refugees from all over the Middle East and Africa are stuck in Cairo waiting for a green light to leave for better worlds. There are international organisations at work to help them, but not all of them are qualified to get the official support. Escaping the chaos from Iraq with her husband, Dalia failed to convince the UN representatives that she deserves to join her husband in the States. But attorney Charlie who handled her case cannot give up, also because he is deeply in a kind of love with her; he tries, against the law, to get her the proper (fake) documentation, and he even get into the plot a fresh employee of the UNCHR.
I personally have a couple of mixed feelings about the book. I enjoyed the writing and the author has a certain power to keep you turning the pages, although the plot development is not always satisfactory. I've found more than once that the different little stories making the book do not necessarily connect smoothly, one of them being Charlie's platonic love. One of the parts that really made sense was about the process of analysing and accepting/rejecting the various files, but I suppose that for that you don't need to read a novel, as a scientific/feature article might be just enough.
I've pushed myself until the end - which was less than satisfactory - trying to read it, but my overall impression is that it could have been (much) better.

Rating: 2.5 stars
Disclaimer: Book offered by the publisher in exchange for an honest review
Posted by WildWritingLife at 23 October