A Story of a Family Break: The Walls Came Down by Ewa Dodd 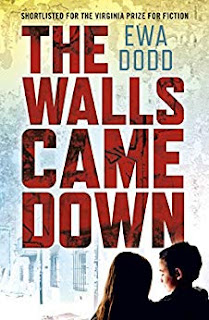 During one of the big Polish Solidarity protests in 1988 in Warsaw, little 4-year old Adam has suddenly disappeard from near his mother and sister. His case was never clarified by the Polish authorities although two decades later his sister, a journalist at a big local newspaper now, never gave up finding him. Adam's disappearance destroyed their mother for ever, as she ended up in an institution for persons with mental disabilities.
Meanwhile, in London, Matt is unsuccessfully trying to dig dip into the history of his mysterious adoption. During a weekend trip to Warsaw with his girlfriend strange memories are coming back, and he is shocked by the discovery. It will take a long, dramatic journey to find out the real story of his upbringing.
In Chicago, Tom is dying and is eaten up by a secret he never shared: his escape from Poland after faking his death in a mining accident. Although he did pretty well financially, his life is empty, especially thinking about the family he left behind in Warsaw.
There are walls to be broken and each of the characters has his or her own walls to tear. The knitting of their stories and the happy ending of the three of them coming together has some surprising twists keeping the reader interested in the follow up. Particularly Tom's story is the most unexpected one, an it takes some time to figure out his role into the narrative.
What I've personally found a bit artificial was the construction of the memoriy flow in the case of Matt. First, how he was struck by the memories during his visit to Poland, and thereafter, as he progressively got back fragments of his past. It is like his memory is activated automatically every time a specific trigger is present which is a good wishful thinking but it doesn't work this way in reality. A more detailed memory mechanism would have clearly added more depth and psychological complexity to the novel.
The political Polish context, during the Solidarity protests and in the post-Communist era is interestingly reconstructed, with the nostalgic tendencies and deep feelings of disappointment towards the current social and economic situation.
The Walls Came Down by Ewa Dodd is an interesting novel with a stand alone subject which captivates. The writing flows and the stories within the story make sense, although, at least in the end, I felt like the pace is too fast forward, jumping too high through events to reach the final conclusion.

Rating: 3 stars
Disclaimer: Book offered by the publisher in exchange for an honest review
Posted by WildWritingLife at 08 July