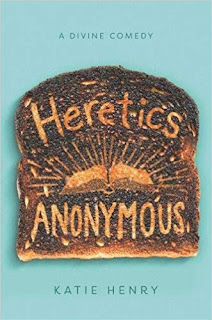 There are not too many YA novels approaching the relationship of young souls with religion - or rather the complete disdain for it - and it is an unusual situation, as in my experience this time of life is rather associated with a complete reconsideration - and once in a while, rejection - of the own religious roots and beliefs. In Heretics Anonymous, Katie Henry made a noticeable effort to fill this literary gap.
In a strict private Catholic school, the atheist Michael is introduced to a secret society of rebels made of the Catholic Lucy who would love that women are given more place in the church and with a genuine, anti-institutional approach - 'Lucy believes in a world that's fair' -, the Jewish gay Avi - the riddle of how exactly he ended up in such a strict religious school is not solved until the end of the story - Eden which is polytheistic, and Max which according to my understanding loves to be dressed in a rather Gothic way. Together, they want - and sometimes succeed - to challenge the strict rules of the school in terms of dress-code or the views on marriage or relationship between gender. With the exception of Michael - which in the end, for the love of Lucy, will reconsider some of his radical atheism - they work and fight together against the absurdity of the school rules based on their unique and sometimes lonely situation. As the character Michael recognizes: 'I'm an atheist surrounded by priests and portraits of popes. Of course I know what it's like to feel alone, to feel closed in by people who want to change to fit their worldview'.
However, when things are not fitting within the group and out of his mounting conflict with his father, Michael decides on his own an extreme act that will almost cost him his place in the school, all the members of the HA are leaving him.
More than once I felt many of the characters in the book are there mostly to populate the book, as their personality and features are not properly displayed. The 'peaceful' and 'harmonious' way in which the book ends displays a certain restrain in creating a dramatic story, the focus being instead on the 'therapeutic', second-chance follow-up. Which means that that YA book with strong rebelious characters still remains to be written.
As for the cover, it deserves a special 5-star as it is inspiring, ironic and smart, which doesn't always happen in the case of YA books, which most often are illustrated in a very pathetic, childish way.

Rating: 3 stars
Disclaimer: Book offered by the publisher in exchange for an honest review
Posted by WildWritingLife at 06 July