The Lives of Many Languages

As someone growing up with more than two complicated languages, I am fascinated by other people's stories of growing up in a multicultural and multi-lingual environment. My children grew up with a similar story, and got even more linguistic boost and I personally cannot see any other way of being a complete citizen of the world - besides usind those multi-lingual skills to travel and use them on a regular basis.
I am surrounded mostly by people with interesting language stories and I am always keen to discover inspiring stories which involves wordings in more than a language, not necessarily translations, but ways in which multitude of words are taking over and shaping our lives. 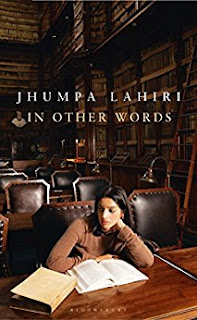 In Other Words/In Altre Parole was on my to-read list for a very long time. A successful writer writing in English, her second language after Bengali, Jhumpa Lahiri decided to challenge herself and switch to Italian, a difficult linguistic choice, but a neutral space for writing a new life page. Words are the cultural connectors, shaping the imaginary mental geography a writer needs to exist. 'Every since I was a child, I've belonged only to my words. I don't have a country, a specific culture. If I didn't write, If I didn't work with words, I wouldn't feel that I'm present on the earth'.
The relationship started while she was still living in the US therefore creating the linguistic bridge and continuity was not automatically enfolding.
'My relationship with Italian takes place in exile, in a state of separation.
Every language belongs to a specific place. It can migrate, it can spread. But usually it is tied to a geographical territory, a country. Italian belongs mainly to Italy, and I live on another continent, where one does not readily encounter it'. Given the geographical separation, the relationship evolved slowly, not at a highly prodigal level. 'In spite of the conversations, the language remains elusive, evanescent', she noticed.
And then she moved to Italy, in exile from the English language, starting the long-term relationship with Italian, a language she wrote her linguistic memoir. 'Learning a foreign language is the fundamental way to fit in with new people in a new country. It makes a relationship possible. Without language you can't feel that you have a legitimate, respected presence. You are without a voice, without power. No chunk, no point of entrance can be found in the wall. I know that if I stayed in Italy for the rest of my life, even if I were able to speak a polished, impeccable Italian, that wall, for me, would remain'. However, it seems that she encountered the same wall while living in America, for the same reasons, when she needed to justify the language she speaks - and writes in. 'I'm a writer; I identify myself completely with language. I work with it. And yet the wall keeps me at distance, separates me. The wall is inevitable. It surrounds me wherever I go so that I wonder if perhaps the wall is me'.
In Altre Parole - which I've read in the Italian version, but keeping an eye to the English translation, because my Italian is way too undeveloped to following coherently 100% of the sentences - is a serious meditation about the meaning of languages and words in the life of writers and how words and grammar too can sometimes define ourselves. 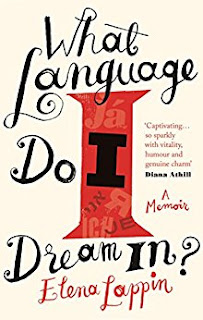 Elena Lappin didn't chose some of her languages she started to learn since her early life: she moved to the then Czechoslowakia as a child, using Russian as the family communication tool, but learning Czech and after that German, all before she was a teen. She moved to Israel and learned Hebrew but her language of choice as a writer remains English. Her childhood was lost in words, trying to find the right word to communicate and connect with her peers.
Besides being a story of many languages, What Language Do I Dream In? is also a story of finding her biological father, an American who lived in Soviet Russia that she discovered late in life.
For Lappin, languages and countries are clearly defining different ages and life stages, each language having the meaning of acquiring a new life. This also means being part of a world with different words.
Posted by WildWritingLife at 20 July

Email ThisBlogThis!Share to TwitterShare to FacebookShare to Pinterest
Labels: elena lappin, in altre parole, in other words, Jhumpa Lahiri, learning about languages, learning another language, life of many languages, memoirs