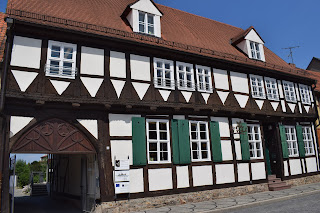 Burg b. Magdeburg is not only the city of birth of the famous military strateg Von Clausewitz, but also the birthplace of the relatively unknown - at least outside Germany - writer Brigitte Reimann.
A multi-awarded author for her short stories, many of them with a socialist-communist topic in the former GDR, Reimann's name was given to the local library and to a promenade. Willi Reimann, her father was in the Soviet prisons after the war and upon return worked at a local bank.
Her premature death at 40 due to cancer didn't give her the chance to finish her only novel Franziska Linkerhand, published posthumously many years after her death in 1973. Besides being a writer and teacher, she followed the spirit of the time and also worked for a while in Hoyerswerda in a factory, for a better grasp into the world of the working class. She also lived in Neubrandenburg where the local literature center was named after her. Fragments of her diaries and letters offering outstanding insights about the literary life in the 1950s and 1960s in the communist Germany were published in the last years, and hopefully I would be able to have a look at her writings soon.
In 2004, a movie about her life - Hunger auf Leben (Hunger for Life) - was aired.
Reimann was the witness of a different post-war generation of German writers, together with Christa Wolf or Reiner Kunze. Her way of representing the world was at a great extent the result of her ideological beliefs. I am curious to see how she succeded to maintain the literary quality.
Posted by WildWritingLife at 11 July