A Fine Psychological Thriller: The Chalk Man, by C.J.Tudor 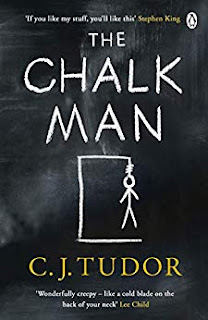 Everything started as a children's game: creating a secret language by drawing chalk man of different colours and sizes, with meanings familiar only to the 4-member of the 12-year old gang. Each has a special colour to use. Life in the small English town of Anderbury isn't spectacular: everyone knows everyone, what they do, where and especially with whom.
But it seems that the closer the community the harder to understand what really happens sometimes. Especially when young people die or are killed, a reverend is beaten to near death. Almost three decades later, the mystery remains and some members of the old gang would love to find the truth. Each of them has his or her own version of truth, and more than one assumptions. Are those assumptions a step forward to the truth or just an unreliable variant of the truth?
'There are some things in life you can alter - your weight, your appearance, even your name - but there are others that wishing and trying and working hard can never make any difference. Those things are the ones that shape us. Not the things we can change, but the ones we can't'. There are no spiritual mysteries, including in what it is assumed to be the House of Gd - but in this book assumptions are approximations, never leading to the truth - in The Chalk Man. The plot and the development of the characters are so carefully and finelly built that one can rarely predict what to expect. Who is really the criminal? Why the crime was committed? In a way, more than once the story reminded me of Twin Peaks: twisted minds, bizarre characters, meteoric presences whose meaning cannot be understood not even after the 10th sight.
I've read some reviews where there were complains that the plot is very slow paced but I think that instead of a car-racing development, C.J.Tudor rather built a puzzle made of very small pieces, one by one. The fact that after the book is over one might think a bit more if it really grasped what is the final verdict is an excellent example in this respect.
I can only be very curious about the author's next book. If for the debut the writing is so elaborated and entincing I allow myself to expect only good bookish things.