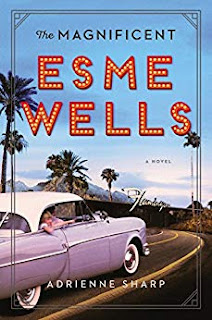 '(...) I knew who Bugsy Siegel and Mickey Cohen were long before we met them, men who made their own way, like my father. Jews who stood up for themselves, refused to be peddlers, pushed back against the world that wanted to hold them down'.
Esme Wells is magnificent by its simplicity and realism. There is nothing to romanticize when it comes to the Las Vegas of the 1940s. Las Vegas itself is a wild place where money are exchange and outbreakers are punished, especially those among your 'own people'. They were wrong because did not understand the chances offered, cheated their peers and tried to run away with money.
It is a sense of emergency among the male characters of this book. They run against time, they are always out of resources and fearful that things will change. Which happens very often. Killing is the last and easiest resort. You can be either one of the big ones, like Bugsy Siegel or Meyer Lansky, or a small pawn, like Esme's father, Ike, who always dreamed to build a future for him and his sad family. But Ike is born a 'luft Mensch' and will die one, killed because he played with dirty money. He wanted to make it his own.
Esme is telling the story of her family which happens to intervow with the history of Las Vegas and Hollywood, with the Jews who refused to be peddlers trying to build their own way in the wild part of America. With back and forth down the memory lane, she is a quiet witness of all the changes as well as to the broken destiny of her parents. Her mother always wished to be an artist but ended up as a second raw dancer, and her father just a tool used for the other people businesses and supposed to never challenge his role.
But Esme, herself caught up in the lures of bad boys and glittering dances in the Las Vegas casinos, is more than a witness of her times. She is a woman which compared to her mother, was strong enough to leave everything behind, including her father and rich much older lover. She, she can start a future of her own. She is magnificent.
The book is well researched but created autonomous characters, which although historically less relevant than the big bad bosses, offered to the author of freedom of creation.

Rating: 5 stars
Disclaimer: Book offered by the published in exchange for an honest review
Posted by WildWritingLife at 09 October