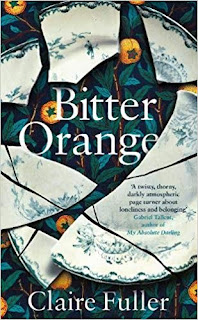 Bitter Orange starts as a slow-paced story of loneliness. On her deadbed, Frances is visited by a vicar which is listening to her confession of a summer spent in the company of a young couple while commissione to catalogue the garden architecture of a mansion in the English countryside.
It is an innocent story at first, of an old lady getting closer and closer to death as the days are unfolding. In the first three quarters of the story, one can hardly figure out the terrible ending once there is a final revelation of the narrative. At the beginning, there is only the lady in her end 30s, spying trough a small wall hole the couple next door, two Irish youngsters. She thought the young lady Cara is Italian, in fact she's not, only dreams about having an Italian life. Once the three of them are getting to know each other closer, there is a web of stories that builds up. But how much truth they tell, it is a different story which reveals partially in the next stages of the story.
There are moment when the three of them look so happy together, that one may think that this book is in fact about friendship and love in the English countryside. But little by little darkness takes it over. Because we acknowlege it or not, there is a darkness that resides even in the most kindest and gentle of us, humans. It is a Hobessian outlook of homo homini lupus which might not operate fully, but at least in this story, it makes sense.
Otherwise, how to explain the terrible crimes of a poor virgin which spent all her life being a caregiver of her mother - that she killed too.
I might confess that I was very much surprised by the ending. After the first half of the book, I accepted the fact that there is a book written beautifully, but wordings are not enough as I need a good story too, therefore sooner or later I will simply give up. Only when I started to figure out there is a different layer of the story, based on various obvious or just suggested hints, the reading headed in a completely different direction. The relative boredom was replaced by the excitement of the art of writing.
It is a pleasre to read Bitter Orange, by Claire Fuller. It gives a chance to good literature, where bt the reader and the author are together on an intellectual journey.