Book Review: A Woman Is No Man, by Etaf Rum 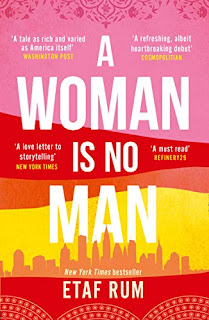 'Let me tell you something. A man is the only way up in this world, even though he'll climb a woman's back to get there. Don't let anyone tell you otherwise'.
A Woman is No Man by Etaf Rum is retracing the story of three generations of Palestinian women from back home to Brooklyn. Geography matters least in this case as 'Palestine or America. A woman will be alone', as one of the women characters, Isra, states. More than a story of dislocation and rootlessness, this book, beautifully told, is about going beyond the cycle of violence against women.
The same pattern repeated over and over again, how can it be broken? Having girls might be considered a curse and marrying them out as early as possible it is the solution to get them out of the house. They are praised only when they procreate boys as those boys once grown up will not need a woman to get married with therefore girls shall be born too. When they do not fulfill this function, women are worthless, aggressed and put down. They are not allowed to leave the house alone, because it is against modesty, and even if they do, they do not know the language anyway therefore they will most likely make a full of themselves.
There is a similar way of thinking and approaching things which ignores reality. Some say it ignores religion too, as it is only a tradition which kept being repeated by default. Fact is that it is not unusual that in traditional settings, women are beaten to death by their husbands. The mothers of those boys rather prefer to offer supernatural explanations - he was, for sure, posessed by a djinn when he did it - instead of accepting their part of responsibility for preventing such a dramatic episode to happen.
The Palestinian women featured in A Woman is No Man seem to have to chance to escape their fate. They need to accept and hide the beatings beneath layers of makeup, do their best to accommodate their husbands even they are violent and drunk and make sure they marry their daughters as soon as possible, heading them to the same cruel fate.
Is there any way out? The opression of tradition can be overcome radically just by leaving. Running away and starting anew and this radical solution is the hardest. Are the minds and souls changing nowadays allowing a midle way? The writer found a relatively mild third way. Learning, as the only way to control your destiny, once acknowledged by the other members of the family as necessary but not radically against tradition, can offer a chance. Educated women can still have a chance of meeting educated men belonging to their ethnic or religious group thus preserving the cultural identity, although at a different level - preferably minus domestic violence and with a certain openness towards the big world. Personally, I am not sure that once you are escaping the tradition you can still leave within the limits of the same pattern of behavior of thought, because mind is free and happy to enjoy the freedom of going each and every day one step further its previous limits. I only assume that each story is different and each tradition is different.
Etaf Rum created that story which leads to infinite discussions. It was hard to say 'good bye' to the characters in this book. Although each and every one of them shared so many conflicting messages and stirs different emotions into the reader. The story is slow paced yet worded strong enough to cover a multiplicity of emotional and intellectual debates.
There is so much to think and discuss about the topics raised, and this is why we have literature. Not only to save women from being murdered - like in 1001 Nights - or to project perfect worlds, but also to make us even more stubborn when we look for love and genuine intellectual experiences.

Posted by WildWritingLife at 02 July