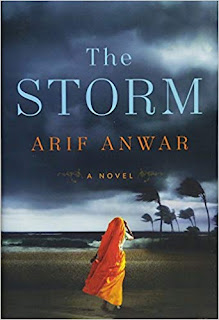 A couple of stories with characters whose destinies are often intertwined, starting from the time of the WWII, the Partition War and the post-9/11 America. People coming and going in the story, sometimes while carrying strong messages and stories, like the waves of a sea in the middle of the storm. Wars, some of them in the name of religions mistreated by humans. The Storm, by Arif Anwar is spanning a couple of generations and has as a main background the 1970 Bhola Cyclone in Bangladesh, that took the lives of half million people.
It is during this storm that the life of Shahryar, that we meet in our 'days' in the USA, while trying to secure a chance to remain in the States with his daughter, changed tremendously. He lost his parents and was adopted by a childless rich family that chose to invest in his education.
The stories are coming back and forth, some of them re-told in another sequence later, some not. For those events that are lost in the middle of the bigger story, it is a pitty because they create certain high expectations for an eventual follow-up. Such as is the case of the episode between Claire Drake, a British doctor service woman in Burma and the Japanese soldier Ichiro. Ichiro's tragic ending will be told a bit later in the story, but there is a feeling of a relative inadequacy of his presence into the bigger narrative. The present-time narrative, particularly the 'American story' is also unbalanced, compared to the strength and dramatism of the sceneries taking place in Asia in the time of WWII, or during the nascent conflict between Hindus and Muslims in the bigger India.
In subsidiary, The Storm is also a meditation about how small and narrow are human ambitions, especially the national and religious ones, compared to the enormous force of the nature, which is overpowering and overwhelming. Nature is blinder than the human ambitions.
As a debut novel, The Storm has an impressive narrative architecture and Arif Anwar is an interesting literary voice to follow. He've found an unique way to create space for human individual stories in the complex context of the separation of Bangladesh from India - the Partition - but also taking into account the dramatic events of the Bhola Cyclone.
It is one of those books that make you curious about a lot of contemporary or less contemporary events, but also opens the heart to stories, with all the imprecisions those are told.