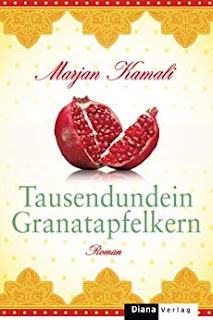 If you are looking for a slow-paced novel with realistic characters with many historical references and a inter-cultural touch, this debut by the Iranian-American writer Marjan Kamali is a perfect way to spend some quality reading hours. Published in English as Together Tea (I've read the German version translated as Tausendundein Granatapfelkern - which means 1001 Pomegranate Seeds, not necessarily a smart choice), the novel follows for several decades the story of an Iranian family that left the country for America after the Islamic revolution. Darya is looking for a perfect marriage candidate for her 25-year old daugher Mina, among the available bachelors within the Iranian community in the USA. After 15 years in America and an American citizenship later, Darya is still longing for the smells and the warm human relationships from her home, although she despises the religious dictatorship.
When Mina realizes she needs a moment of reflection about herself and her future, the decision she took is to revisit the places of her childhood and reconnect to her Iranian roots in her country of birth. Her mother can't wait to join her and together they embark on the adventure that involves not only revisiting old relatives and places, but also coping with the religious police and the double life mostly the young people are living: the segregated outdoors life where the women outfits are under the scrutinity of the religious police versus the freedom of enjoying the simple things in life behind the closed doors.
Finelly written, the story is flowing nicelly. The character are realistic that you can imagine each and every one of them in real life. The story is adorned with interesting details about the rich Persian history, culture and cuisine. Those details are adorning beautifully the narrative offerig an alternative to the scarcity and usually stereotyical information available about Iran in the Western media.
This quality chick-lit has everything a modern reader might be interested in: a coherent story, a love episode, strong women fighting with difficult circumstances, multicultural contexts and recent history. On a weekend afternoon, you hardly want to move from the couch until the book is finished.

Posted by WildWritingLife at 28 October