PJÖNGJANG, by Guy Delisle, a Visual Diary of 2 Months in North Korea 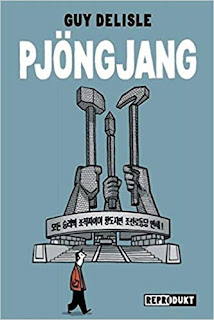 On professional assignment for two months in North Korea - apparently, such projects are possible for foreigners in the world's most absurd dictatorship - Guy Delisle is taking note of his environment.
He is not the only foreigner here, as he joins once the week another bunch of people working for NGOs or other projects using local workforce. Always surrounded by assigned personnel, never able to see the country with his own eyes, Delisle is offered the version that the propaganda set up for him. Everything is a potemkinesque show aimed to brainwash the locals and confuse the visitors.
Once out of North Korea, where he worked in an animation studio, Delisle is setting up the visual diary, where he mentions the camps and the political and economic/social restrictions from the everyday life. He is not a passive observer, far from it. However, he mostly prefer a very detached, half-ironic attitude. After all, he is just a passer-by through this bizarre world.
Pjöngjang - which is the North Korean capital city - could be a good introduction into this strange universe. The information is dense and the illustrations might help to figure out the extent of the everyday life absurdity.
Personally, the graphic format did not appeal too much to me, as I am more into expressive drawings. Delisle style is very much typical for the French school of graphic novels. There are also a couple of arrogant/mysoginistic observations when it comes to women characters that are completely out of context and completely misplaced - not that such lines are ever welcomed in a public text.
I've read the German speaking version, published by Reprodukt.