Book Review: The Book of Unknown Americans, by Cristina Henriquez 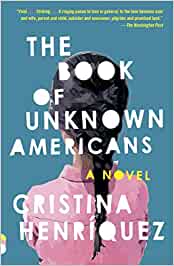 'We're the unknown Americans, the ones no one even wants to know, because they've been told they're supposed to be scared of us and because maybe, if they did take the time to get to know us, they might realize that we're not that bad, maybe even that we're a lot like them. And who would they hate then?'
In a time when the hateful political discourse in America targeting immigrants from Spanish-speaking countries is at its peak and the literary world is discussing who and at what extent is allowed to write about non-white immigrants, there are decent books on the topic to keep you away from this Babel.
The Book of Unknown Americans by Cristina Henriquez is made of different first person stories of immigrants of South or Central American origin whose lives are intertwined. There are voices from Panama, Nicaragua, Mexico, Guatemala and Venezuela, of different ages and with different social and educational backgrounds. Some are citizens, some just arrived. Some come here for their children, others for a better life for themselves. For all, America is not a dream, but a necessity. There is no other place they would go, and often once they took the decision to move here there is no way back.
The accounts are simple, sometimes just an account of facts, slow paced, without anything special happening. This simplicity gives authenticity to the writing in my opinion, because everything goes smoothly and is as natural as the daily flow of life. Those modest voices sound like voices of real people, normal everyday people, struggling to survive and working hard. The survival from a day to another is the meaning they often give to life.
This uncomplicated slow-paced life account reveals though terrible realities those 'unknown Americans' are facing every day: abuse in the workplace, discrimination, racism. However, those people do not try to change the world, at the same extent they don't come here to build fantastic careers. They try to protect themselves, to strengthen their ties with their local community and live their life. They will never accuse America, they will never hate America. They just keep living their modest lives.
In a very simple beautiful way, The Book of Unknown Americans reveals a world rarely seen. No one is writing news stories about those 'unknown' people. They are too human to make it on the front page. But I am glad to have discovered them. Knowing they exist makes your life of priviledges humble.