Reading around the world: Romain Puertolas - The Girl who Swallowed a Cloud as Big as the Eiffel Tower 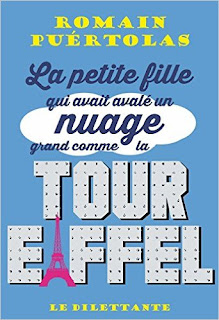 This is my first encounter with this very interesting new French author and I did not start with his most famous first book but with his second work. True is also that in the last years I neglected a bit French literature and reading in French in general - but at least this month I will come up with more than two reviews of French books. Puertolas is considered as a literary phenomenon: he writes very fast and not long ago used to be a police officer in charge with reports about irregular immigration.
His first book, The Extraordinary Journey of the Fakir who got trapped in an IKEA Wardrobe, was written in between the work breaks and ended up with a good publishing contract that ended his bureaucratic career and opened the doors to the full time literary life.
Bureaucracy can inspire great works of art if you are a sensitive soul. The settled routine can be the best frame to give you that freedom of mind for creating.
The book about The little Girl who swallowed a Cloud as Big as the Eiffel Tower is a combination of Boris Vian and Magritte, with ironical traces of Obama and Hollande. Plus Chinese monks and a Province Dupois who is learning to fly in one hour in order to save her adopted daughter Zahera lying in a hospital bed from the day she was born. Stories within the stories, with faits divers adorned to the dream reality, the story does not have an end. Because imagination is a gift we forget easily we have.
I recommended reading the book in French, especially for some funny words game that cannot be translated without missing the original point.
Rating: 4 stars
Posted by WildWritingLife at 01 April