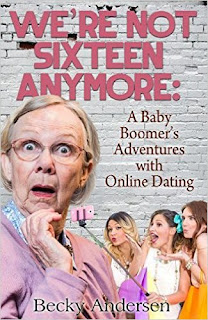 Online dating for seniors? Why not? And if the answer is yes, why? I am quite out of the dating game now - online or not - but the phenomenon as such is interesting, regardless of the age limit so I approached this debut book by Becky Andersen - to be released this June - with curiosity.
My expectations were more than rewarded because besides the very practical tips about profiles and how to approach online matches and how to get ready for the first, second and thirds date, it is so well written and shares so many hilarious experiences that was impossible to put it down until the end.
The end is happy, followed by a marriage, but this is maybe less important. In a way, you maybe want to read more stories for couple of good hours.
This is Becky's first book and I was curious to find out more about the writing process, her experience with the publishing industry and maybe some tips for the writers in the making. Her experiences are the subject of the interview published part of the Writers Secrets series.

Disclaimer: The book was offered by the publisher via NetGalley.com.

What was the most difficult part of starting to write?
For me, it was trying to determine how to immediately capture a reader’s attention. I think if this had been fiction, it might have been easier.  But to put down in words just what happened to me that resulted in this book, there were almost too many options!  Do I start with my background, with the death of my husband, or do I lay groundwork on being a baby boomer?  I think the paper industry benefited from my confusion, because I would type page after page, print them off, then lay them aside and read a few days later.  I filled up my recycling basket several times, and bought several reams of paper over the course of several weeks.  I have to admit that while I kept telling myself “I’m retired,”  There’s no hurry,”  “This is just a hobby,” I also kept thinking, “You’re not getting any younger,” “Better get this stuff written before I develop dementia,” “I need to get a life!”

My tips for the first-time writer:
I have discovered, after the fact, that there are “clubs,” or groups of writers who get together and critique each other’s on-going work.  I wish I had known about that at the beginning. I struggled being my own worst critic, and sometimes spent a lot of time writing something, only to have the editor suggest something else.  It would have been nice to give a chapter or two to some others to get their feedback on which way the story was headed: is it too weak, too “talky,” should I write as though I was telling my story directly as it happened or use past tense, would the story be stronger if I started at the “end” and flashed back to the beginning, or just what?
Also, ideas or phrases that are PERFECT for the story may wake you up at night, or pop into your head during a shower, or in the middle of a movie – so always be able to write them down or record them vocally. I would have Hollywood after me to make my book into a movie by now if I’d done that!
How easy was it to find a publisher?
I had worked for 23 years at a liberal arts college where reading and writing are as common as promises during an election year.  For me, it was easy to ask one of my friends who has published books before just what I should do.  She advised going to an “indie” publisher – (I LOVE being able to speak “author-talk” by calling things indie instead of independent) – but cautioned that doing so would not guarantee that my book would be automatically accepted. I went with WriteLife/BQB Publishing, after researching it and several other companies.

What is your writing inspiration?
When I first started dating, I would put little snippets onto my Facebook account, mainly because I normally don’t have anything of interest to say.  For example, the first time I wrote something was Went on my first "date" as a Match.com-er. He was four years younger than me. Guess it's official: I'm a COUGAR!!! meow.
p.s. nice guy, but no chemistry. Next!
Well, I got more likes and comments than I’d ever had in the several years I’d been on FB.  And when I had two more dates later in the week, each with a different guy, and posted a little more detail each time, I found out my friends loved my “love” life (or loveless life). I write with a self-deprecating humor, and every post I made there were many words of encouragement and pleas to write a book.  After I married Dave, he encouraged me – and the funny thing is my first husband always told me I should write a book, so I figured if the two most wonderful men in my life wanted me to, then I should definitely do it!

Do you have a special writing ritual?
No, sorry.  Unless turning on the computer and trying to keep from checking out Etsy, FB and Gmail count as one.

What is your lesson learned from online dating?
I learned several things from online dating:  I learned that I was shallow.  At the beginning, I would scroll only through the photos of the men, and choose to open the profile of whomever I thought was attractive.  While that was okay when I was shopping for clothes, I realized (thank heaven) that there is more to each human being than mere looks, and that realization caused me to choose dates based on much more than their appearance.  (And I’m thankful the men did the same!!)
I learned that there are a lot more lonely people in the world than I ever imagined – and that there are a lot of people in the world with the same likes, dislikes, dreams and plans as I had.
And finally I learned that I could – and did – do something for once that was out of my normal comfort zone, and that made me a stronger person, I think.
Oh – and of course the MAJOR lesson learned is that these online dating sites can really work!!!  ☺

What is your next step?  Do you think about your next book already?
Oh, Ilana!  NEXT book?  HA!  Although, I’ve had people come up to me and tell me their stories about online dating, so perhaps – emphasis on PERHAPS – that would be a next book.
But my next step is to continue doing things outside my comfort zone that I need to do to market the book.  I’m trying to screw up my courage, walk into a book store, and say “Hi,  I’m a new author.  Would you like to host a book signing for me?” Just kidding – but I am hesitant to “toot my own horn” so to speak.

Posted by WildWritingLife at 20 April