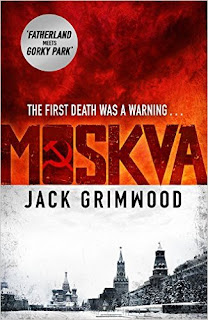 I am very cautious about Cold War thrillers because most of them are kitschy predictable: close to the middle of the book you already know who is black and who is white and why and until the end is just the confirmation of the generally accepted narrative. This happens not always intentionally, but due to the general historical circumstances chosen by the author as the background for the action.
Moskva has the advantage of relying on two very different, confuse and not fully documented circumstances: the war against Germany, including the Russian conquest of Berlin, and the year(s) of Gorbatchov, when new and old guards co-existed and old conflicts were doubled by the fast-forwarding wars  for power of the new yet deeply rooted in the system elites. These times of transition, incertain about the final results are interesting to observe from outside for their rich events and fierce fight for supremacy with unpredictable results. The plot is built around the unknown disappearance of the stepdaughter of the UK's ambassador to Moscow and the stubborn search for her by major Tom Fox, former priest and military active in Ireland, whose daughter killed herself at almost the same age as the girl.  Meanwhile, young boys disappear and are found dead and Wolf got to know strange people, children or gran-children of vetarans of the Great War, belonging to different layers of the Soviet nomenklatura.
Cruel stories during the war, including of cannibalism, still haunting the memory of the then child soldiers are terrifying and creates well written moments of tension and expectations for the worse. The book is well documented and has a taste of authenticity which is one of the big assets of the story. There is a lot of high speed and surprising situations and unexpected explanations.
Moskva it is one of those books to remember and that you can willingly read more than once, because is simply that good.
Rating: 5-stars
Disclaimer: Book offered by the publisher via NetGalley.com in exchange of an honest review
Posted by WildWritingLife at 15 May