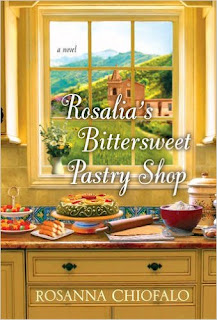 Reader of this book, expect mouthwatering descriptions and inspiration for a long trip top Sicily. I recognize I am into both so I am the predictable victim of such lovely books, but somehow, the repertoire of sweets - with recipes at the end of the book - is far beying many other similar books I've read before.
An American journalist with Italian origins, Claudia is landing to a nun convent ready to write a book about the famous pastry produced there, especially by Sorella Agata who is the co-author of it. Away from the fast paced NYC life, she is becoming the story partner of Sorella's dramatic life and her outstanding achievements.
Most of the story is placed in the impoverished post-war Italy. As a teenager, Rosalia, a tailor's daughter, is the victim of a rapist who will never be caught. Escaping by herself from the caves where she was held prisoner, she arrived at a convent where she will be the superior later in her life. For the beginning, she is decided only to stay until she will recover and will find out her family, but things are getting more complicated. Based on a letter Rosalia was forced to write by her captor where she wrote that she is pregnant and married him, her parents left the hometown, ashamed by what they considered the dishonour she brought to them. Meanwhile, she is learning to prepare the pastry and felt in love with the young Antonia, who aspired to be a chef trained by the famous French establishment Cordon Bleu. They got engaged but everything fells apart after he was accepted for a scholarship at the famous school, as Rosalia still hopes to find her family and cannot believe they just abandonned her. Heartbroken, Antonio leaves for Paris still hoping that one day she will follow him, although only temporarily. Things were meant to be different. Rosalia decided to become a nun and dedicates the rest of her time to pastry and helping women in need, many going through the same dramatic experiences as she does years ago.
Pastry is for her an emotional healing: 'While she prepared her prized sweets, she emptied her mind of all worries and just focused on the task before her'. This was probably, together with her tears, the secret ingredient everyone was suspecting her to use for the well-known casata cake. With patience and hope she will find or be found by his parents and her sister, and will meet again Antonio too.
The story is slow paced, without being boring or uneventful, with many savory descriptions that can inspire the food writer too. There is a funny musical confusion, as the song 'Mambo Italiano' is attributed to Carla Bruni instead of Carla Boni. Non-Christian, I find many religious references or stories surprising, like the cakes in the shape the breasts of a lady who was tortured for her resilience by cutting her breasts off.
I strongly recommend this book to the foodie and traveler in you or just for savoring a good story during a sunny weekend.
Rating: 4 stars
Disclaimer: Book offered by the publisher via NetGalley.com

Posted by WildWritingLife at 10 May