Why and how to travel to North Korea 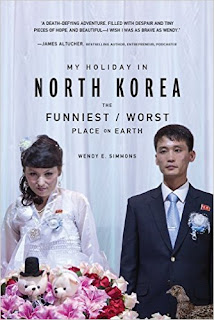 I have a confession to make: I've spent the first years of life in a crazy dictatorship, where one of the best foreign movies on the two-hour TV program were North Korean movies. I will never forget the one where in the front of his track, a peasant is crying over and over again when he was delivered the news about the death of the Great leader no.1. Don't forget about the gigantesque shows on stadium, where huge images were made up of small people carrying each and every one a piece of puzzle. And so on and so forth. Dictatorships changed, leaders died, but North Korea remains the one and only crazy cuckoo nest with (oops) nuclear powers, where people are starving and sent for years in internments camps.
Wendy E. Simmons book is not a political manifesto or a thoughtful serious intellectual analysis of the North Korean system, but somehow it offers more authenticity and food for thought than any theoretical evaluations because it is built based on the travel writer skills. It observes, analyses, ask questions and, yes, laugh a lot because, seriously, this is the best weapon against dictatorships. For your information, people in North Korea do not have this priviledge. It is a real Dadaland, populated with real brain washed people and many generals. 'Everyone in NoKo lies to you about everything all the time', and I am thinking how many decades will it take to get used to say the truth again. During the ten days spent there, under the close supervision of 'handlers' - most probably attached to various local intelligence structures, this is my hint not the author's  - the boring to tears official version of the country delivered makes you suspect there is much more hidden under the beautiful carpets of Pyongyang.
'North Korea is a country of secrets, lies and questions and no answers. It was as much as psychological journey as a tourist experience for me, and I was profoundly affected by me time there'.  The more testimonies the better, for understanding all the fine details of a world whose subtleties are mostly foreign to the Western reader or observer.
Rating: 4 stars
Disclaimer: Book offered by the publisher in exchange of an honest review
Posted by WildWritingLife at 16 May