Book review: Point of No Return, by Martha Gellhorn 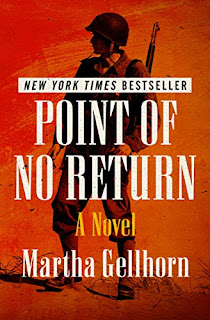 I rarely read war novels, maybe because I think that the reality itself is enough raw for not looking further to fictional war stories. However, the recommendation of the author - Martha Gellhorn, a much praised war correspondent - was an encouragement to make an exception.
The novel starts slowly, covering the advancing of the American troops on the German territory during the last months of the World War II and their dramatic encounter with the remains of the Nazi Army. A dark ambiance when things are slowly moving, if at all, while the soldiers are trying to fill their time with the pleasures of the flesh and non-sense activities, such as eating glass or throwing knives. People of different backgrounds, without previous military training and sometimes with a minimal life experience are brought together for fighting the enemy and liberating Europe. There is a feeling of inadequacy and pessimism, balanced only by the hope that war will finish soon and everyone can return to their previous civilian lives. Although, many of them will make it back home, and even those lucky enough to make it, will for ever be haunted by their experiences.
Such as, for instance, Jacob Levy, a Jew whose weak identity is relatively badly received among some of his American peers. Despised or pitied, he is the most interesting character of the book, developing not only as a man and human, but becoming aware by his identity, particularly after the dramatic encounter at Dachau - a camp about which Gellhorn herself was among the first to report. If previously Levy was rather indifferent about his Jewish identity, after Dachau he decided that: 'He was not going to abandon the people. He had joined himself to his race and to all those who were destroyed as his own were'. His radical decision to enter with the car in a group of Germans chatting freely near the camp and subsequently kill them was the consequence of the revelation he had while visiting the remains of the camp. It is hard to imagine anyone else's feelings after such an encounter, but we are operating in an environment which challenges any remnants of human logic.
Simply written and with long static paragraphs describing the smallest details of the fights and set-backs, this book is a valuable reference for the WWII literature, for its realism and focus on identity transformation and personal challenges.

Rating: 3 stars
Disclaimer: Book offered by the published in exchange for an honest review
Posted by WildWritingLife at 14 January