The art of turning reality into a story 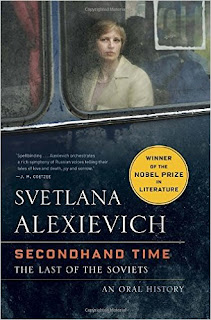 As I previously wrote, when the winner of the 2015 Nobel Prize in Literature was announced, I was relatively surprised by the choice. The fact that I was not familiar with the name of the lucky writer was not my big issue, but the fact that she was not a writer of novels and works of fiction in general, but a journalist by education and profession. As I would discover myself later on too, her books are samples of cold - as the reverse of subjective - accounts of realities that faced the Soviet and post-Soviet world. The Secondhand Time, for instance, which I just finished today, is an account of oral history of memories about the post-WWII Soviet Russia and its 'democratic' aftermath. You may recognize there all the common places of Soviet 'nostalgia', from the regret for the reduced place of literature and theatre in the everyday life until the job safety and the 'low and order'. 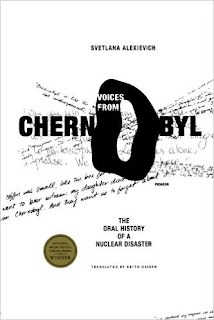 In 'Voices from Chernobyl', a similar oral history project is done in order to give voice to the witnesses of the nuclear catastrophe. Days and events are reconstructed hour-by-hour in an efforts which outlines the layers of feelings and shock specific for those times.
You may say that it is not too much creativity in those books and with a recorder anyone can really coordinate such a project. The art of the author and her main asset is the ways in which the questions are asked and the angle is set. As a journalist myself, I recognize the tremendous effort of looking for the right questions that can not only bring you more truth and authenticity and a competitive advantage to your story, but to offer equal foot to the participant at the discussion. Awarding such an effort with the highest literary reward is a recognition of the merits of quality journalism and the hard work of the journalists themselves, of recording facts and being the servants of truth. In a time when we are talking so much - maybe obsessively - about 'fake news', the world disclosed by Svetlana Alexievich and her life-long dedication for journalism are an encouragement and a hope that the hard work and pursuit of truth is a duty, and not just a fashion. Making the choice for quality journalism, regardless of the circumstances - and Alexievich as a journalist that worked and published most of her work during Soviet times knows it the best - is not a subject of negotiation, but a deontological obligation.
Posted by WildWritingLife at 14 January