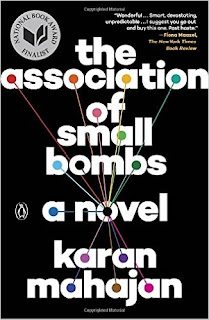 I developed an awkward relationship with this book. I started by being curious to read it, then stumble upon some reviews and decided that actually I don't have the patience for such approaches. Then, two weeks after, I started it again and finished it within a couple of hours.
The good news: I was definitely in love with the writing. Unpredictable, with interesting twists and some ironic-dadaistic irresistible interventions - 'Delhi has no bird-watchers, only machine-listeners'; 'One session was called off because a stray dog wandered into the court and bit a policeman'. As a reader, you are introduced to a completely different reality, with its own norms and codes and meanings, where irony and drama are just names given sometimes to the same reality.
The complicated news: The topic as such is highly complicated with a high risk of ending up in stereotyping, especially if you have already some own thoughts about terrorism - meaning completely rejecting it, on all possible grounds. This was the main reason why I decided to give up the book at first. The idea of understanding how someone turns into a terrorist is appealing and particularly in the light of the last decade of terror in the middle of our Western world is appealing. However, terror was part of the history of our modern world long before there were Facebook symbols to add to your profile (nothing wrong with this, anyway). What I am afraid of when I have in my hands a book about the motivations is to deal with the common tiers-mondiste approach according to which someone turns into a terrorist because of oppression. (The book mentions en passant Carlos the Jackal and 'Palestine' as part of the discussion between terrorists). The people who end up placing bombs in public places in The Association of Small Bombs are not radical Muslims but operate in an environment where Muslims are victims of discrimination and the partition continues to be a cruel reality of the everyday corrupted political environment. In two places is quoted Gandhi according to which Jews faced with the Shoah would have decide to suicide en masse - a completely wrong approach as, sorry Mr. Gandhi but the Jews survived, although coping for more than a generation of trauma, but they, they survived.
In a world completely upside down criminals are heroes and everyone is a potential terrorist, but this is not the world we, normal people want, but they, the terrorists and there is no justification for it.
The book creates an interesting investigation into the ways - more or less subtle - in which a terrorist attack can destroy and challenge lives.
The Association of Small Bombs was worth reading and offers a long list of topics to discuss and approaches to challenge. We are living in a world that needs new concepts and perceptions for a different understanding of old realities and such a book can be a good incentive for the ongoing much needed conversation.