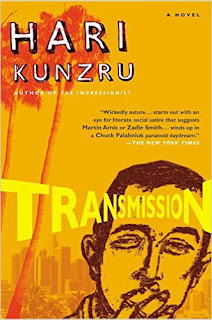 I am interested in novels dealing with current cyber or geek topics, because I am curious about approaches of unfolding realities. Transmission by Hari Kunzru is one of the few novels that I have on my reviewer shelf and has actually enough twists to make the reading enjoyable, with some surprising twists and some unexpected literary wanderings.
Arjun Mehta, a mediocre computer geek from India is one of the many winners of an interview for relocation in the US, for an eventual contract in Silicon Valley. In fact, he would be just subcontracted for low-paid jobs in American companies. As the financial crisis hit hard, he lost his latest position at an Internet software firm. As a revenge, he creates a virus named after his favourite Bollywood star Leeila that will create major disruptions in the US and the whole world. Things are going out of control and he becomes a most-wanted FBI target whose fate will remain, until the end of the book, unknown. Many think he was joined by Leeila who mysteriously left her filming location in Scotland. Arjun Mehta went out of his American dream but remained faithful to his Leeila fantasy which, miraculously become reality.
The book approaches, sometimes in a cynical ironic tone, many topics of political and social current interests: the dynamics of Indian family, the European immigration policies, the differences of perspective between 'Orient' and the rest of the Western world.  The enumeration of all these sounds very boring, but the way in which those topics are interwoven into the big story is interesting and makes you take things more seriously. Or just have a cynical smile, because it is oh, so true. The pace is alternating between the face run of the bytes on the screen and the slow moving up out of a dream. The cyber reality complicated relationships and made us vulnerable of any unexpected disruption. This is our kind of inter-connected life it is almost impossible to escape, unless you are a IT magician as Arjun and his peers.