A fine psychological thriller: The Book of Mirrors 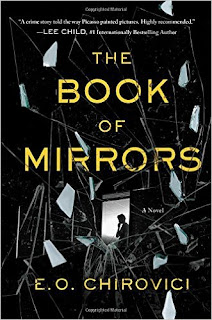 After more than 2 decades, the murder of a psychology scholar at Princeton is finally elucidated, following the unfinished manuscript sent to the literary agent Peter Katz. Reconstructed through the stories of people involved in the story, the criminal is finally found but this is not the main interest of the book, but rather the misleading games of memory.
In the vein of the classical murder stories, there are no spectacular turns of events. Instead, what it really matters and fascinates in this story is the way in which each and every one of the individuals connected to the murdered professor share their own interpretation of facts. Far by being chronic liers, they might be just the victims of their own imagination and the hidden ways memory operates: distoring the facts, subjective, projective and often misleading. But who are we when not relying on facts of the past, when future is just an idea? We see ourselves and remember events as disparate pieces of broken glass and the this may be just what we have for now.
However, at least when it comes to reconstructing a crime, truth can be revealed, and an experienced retired investigator goes straight through the maze of lies and omissions, but while the book is about to finish, the reader is already deep into his or her thoughts about the multiple faces of reality.
The book is quite slow-paced and without spectacular page-turning events, but well written and provocative enough to make you think or challenge the way you think. The clear, shortly cut sentences was a good style choice. I also liked how the various elements of the story are filled, with small ambiance and dialogue details.
Maybe the observation of one of the characters has a sparkle of truth: 'People have never been interested in reality, but in stories'. In any case, The Book of Mirrors is a good story to read.

Disclaimer: Book offered by the publisher in exchange for an honest review
This post contains affiliate links. At no cost to you, I earn a small commission if you decide to purchase the book. It doesn't affect the way you shop books, and it's a great way to support WildWritingLife.
Posted by WildWritingLife at 06 March