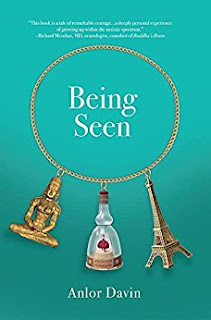 Writing your first book, especially a memoir which has a strong personal element, is a big challenge, because one struggles between the temptation to tell his or her story and the need to be authentic and interesting. Some stories though do not need too much effort to be appealing to the reader, as revealing extraordinary life journeys. One of such encounters I had the last year was reading the book by Anlor Davin, Memoir of an Autistic Mother, Immigrant and Zen Student. A couple of months after the launch of the book, she had the kindness to answer a couple of questions about her writing challenges and her interesting life story.

What was the most difficult part of starting to write your memoir?

At the time I started to write my memoir, which was the year before my formal diagnosis of autism and the proper medical treatment for it, I had become so ill and in I was in such terrible pain I thought I was going to die.  That blocked writing because I did not have much physical strength, and I was also in a mental kind of fog.
In case one is interested in my illness: In a few words, my sensory challenges had become such that I could no longer go out at all (I dragged myself to do grocery and such vitally important chores, but it was extremely difficult, always). One of my co-morbidities was adrenal insufficiency and a “nervous knot” had formed in the left side of my neck that paralyzed my upper left and had me in pain at times of stress (most often when exposed to artificial sounds, smells, lights, etc.). I limped in pain as the pain shot all the way down my back.
Your mother tongue is French, but your language of choice is English.  How hard was it for you to juggle between the two languages?
I did not juggle between the two languages as by the time I started to write my memoir I had been long enough in United States (over 20 years) that I had become quite American.  I thought, spoke and dreamed in English.  Also, at that time I did not know the “autism jargon” in French, learning the English one was already enough novelty.
What inspired you to write?
When I was so ill I felt so trapped inside: I was unable to express myself because I became overwhelmed at extreme speed and just about all the time.  I also felt invisible: nobody understood what was going on with me, people just thought I was plain nuts.
Often t that time when I talked out loud to someone (which was not very often), I had “pressure speech”, which Wikipedia defines as “a tendency to speak rapidly and frenziedly, as if motivated by an urgency not apparent to the listener. The speech produced, sometimes called pressured speech, is difficult to interrupt. It may be too fast, or too tangential for the listener to understand. It is an example of cluttered speech.” Thus friends who were also (patient) zen students were often the only people who spoke with me during those difficult times, and they felt I ought to write down what I was trying to say.  And that’s how I started to write my memoir.  Now I even have a website -anlordavin.com for it!
What are your favorite authors? What kind of books do you like to read?
By now my Zen practice has pervaded my entire life: I often feel the only books that really interest me are about zen, for example “Training in Compassion” by Norman Fisher, “The Forbidden Lamp” by Sue Moon and Florence Caplow or “Nothing Special” by Charlotte Jocko Beck.
I am a voracious reader, I always was, so at age 52 I still read just for the pleasure of it, all sort of books, picked kind of haphazardly in the public library near me because I can’t stay too long in the library due to lights, smells…and yes, even noise at times; I am easily engrossed, but no matter how much I get enthralled by the book I am reading, in the end I often feel it is a distraction: It often happens that several months later I have completely forgotten about a book I have read and I accidently check it out again.  I avoid violent books of any sort. If the title and the book cover of a book seem in any way aggressive I won’t read the book. I don’t have filters and my mood quickly becomes pervaded by what transpires in the book; my sleep might even be disturbed later that night.
I also read a lot of books by other autistic people.  Some of them I like, like the “classic older books” by Liane Holliday Willey, Temple Grandin, William Stillman, Carly Fleishman and her father, Rudy Simone.  I also like some more recent books like “The Reason I Jump”, “NeuroTribes”, and recently of course, other autistic authors have shared their books, like David Patten “Dummy”, Joy Raven “Life in the Asperger’s Jungle”, or Anne Ross “Beyond Rain Man”. I usually find something interesting in all of them: After all, I can relate.
How important is sharing their personal story for rising awareness about autism ? Do you have any feedback so far from people in a similar situation?
I find that all of the autistic authors have something new to tell about autism: it is really such an unknown territory yet. I am all for “sharing your personal story to raise awareness about autism” because it dearly needs it.  We might think we understand autism much better these days, and to a certain degree that is true, but we are really only about a third of the way…the remaining 2/3 still have to be told.  For example many people still think that autism is a disease that can be cured.
Judging by the type of feedback I get when I do book readings for people with disabilities, I find that my book is better understood and liked by those like me.  I also get a lot of emails from people like me, and they are always positive.  It seems to me that when I have received comments I do not understand well, it is from people who are not autistic. No matter how much I want my book to inform people who are not autistic what it is like to be autistic, it seems not to reach people whose interests are somewhere else and far away; autism seems to be yet another “beyond words” thing (just as, for example, it is impossible to explain what exactly is “spiritual awakening” and how Zen practice “works”).

What are your writing plans for the next months?

One of the most rewarding happenings has been the meditation group I facilitate once a month in San Rafael, California, for people on the autism and neurodiverse spectrum. More information about it can be seen at the website autsit.net

Also, in a few months my book will be published in France (since translation is a way to earn money for me, I translated it myself) under the title Etre Reconnue.  Since everyone seems to like the book’s cover and its images, my French publisher kept it the same in the French version, only of course in French.

My partner and I have been told a few times now that we ought to write a book about the relationships of autistic people, or something in that vein -- especially after people watch the video “https://youtu.be/nEv5MoecWK8. But we have not yet decided to do that.