'Your heart is a muscle the size of a fist' 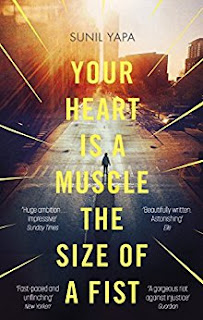 Placed during the turmoil of the anti-WTO protests in Seattle in 1999, this debut novel by Sunil Yapa is a beautiful meditation about tenderness and trauma, the limits of violence and the challenges of social activism. The violent encounters during that November are covered for one day, and told from the different angles of the participants.
Very often, there is a kind of point-counterpoint technique, when a event is retold starting with the last encounters of the previous story. The events - most of them of very violent nature - are unexpected and so vividly described that as a reader, you can easily feel yourself as part of the action(s) unfolding.
Another interesting aspect of the book - named after the name of a song by a punk band, Ramshackle Glory - has to do with the perceptions and discussions regarding the evolutions of leftist movements and mode of actions, from 1968 until the present.
I personally was very interested in this book, because I am always looking for literary interpretations of current political events and social context. From this point of view, both the topic and the approach are very appealing unique choices.
When I started to read the book, I was instantly caught by the story, especially during the first 100 pages. However, shorly after my disillusionment increased, as after a while the narrative seems to turn in the same emotional circle which is a trap because emotions aren't always communicating information or can help advancing the story. Therefore, I ended up wishing that this book was less a therapy-like confrontation and overview and consequences of feelings and more a well-built story. In this case, the author is not a good story-teller but still succeeds to reveal interesting aspects of the human psyche and of the psychology of the masses in general.
One of the characters which are more than a bundle of feelings is the Sri Lanka representative to WTO, Dr. Charles Wickramshaw. Through his personal story and encounters, it is possible to understand all the contradictions and tensions of the street activism, as well as of the institutional functioning. Two worlds collide, one of them where the cost of protesting can be the lost of individual freedom, as his own experience of prison proved. Seen from the eyes of a representative of the 'third world', a region the protesters assumed to defend, the anti-WTO debacle was in fact a deterrent of the efforts to help those countries to reach the level of economic and social 'normality'.
Despite its inerrent ups and downs, this is a book I recommended to anyone interested in discovering a new perspective and an unique literary angle on a slice of social and politcal reality, either you are in the US or out in the big protesting world.

Email ThisBlogThis!Share to TwitterShare to FacebookShare to Pinterest
Labels: 3 star book review, book reviews, sunil yapa, your heart is a muscle the size of a fist