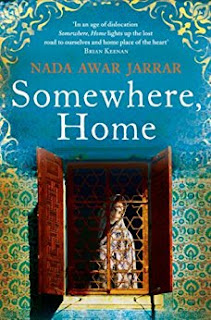 In the last weeks, I started to read a couple of writers from the Middle East - some of them will be featured in the next posts - discovering that in the case of many, there is a common topic: the longing for home, after long years of dislocation. This specific exploration of a topic brings new interpretations into the world literature and I am really glad that those works are introduced to the Western public, many of them directly in English.
In her debut novel, Nada Awar Jarrar is exploring the idea of home through the stories of three different Lebanese women, whose life stories interwin at certain moments. The intensity the stories are told decreases from the first to the last story, which creates a certain disbalance and, in my case, the disappointment as it raises high expectations at the beginning.
The first story is for me an outstanding example of how the words can be powerfully used to bring back to life worlds and alternative stories. The writing is so beautifully that I hardly wanted to stop reading. The chosen words can reveal deep feelings and different layers of emotions, like in this case: 'I was somewhere between child and woman, feeling the same anxiety the adults did but not knowing what to do with it'.
The main protagonists of the stories are women, for whom love is hidden and marriages are set since early childhood to avoid the worries of the future. But they are also able to decide their own future, including by staying out of the usual society requirements, assuming the singleton status. All are united though by the search for home, for the place, real or imaginary, made of memories or the everyday moment, where they assume they belong to. I especially loved this description of home, from the first story: 'Back home was where fragrant pine trees grew into tall umbrellas and rivers chimed down to a light-blue sea. Back home were snowy winters and balmy summers, and gentle sunshine every where in between'.
However, in the case of the war-torn Lebanon, there is always a 'before' and 'after', with the right of belonging to a home being often symbolically refused based on the lack of a common past during hard times. This is an example of the ways in which doctor Kameel comments to Aida: 'It's always like this. People like you return, not having known the terrible years of the war, and you want to teac us about life'.
Another aspect I've found interesting in this book is how the urban and rural collide, with Beirut often seen as a mythical city - 'Beirut is like nothing I have ever imagined'.
There is a little house in the mountains though that brings everyone together, but the search for identity doesn't have to stop, as it only needs a proper framework to operate properly. The language which, in the first part, is evocative and poetic helps to recreate worlds and a particular genuine ambiance. Maybe this is both the strongest and weakest point of the writing. Half through the book, my disappointment increased as the writing is becoming self sufficient when is not just plain, monotonous.
Despite the mishapes of the writing towards the end, I strongly recommend it for some of the powerful stories as well as the literary testimony. I am looking forward to explore more writers from this region.
On a side note, I really appreciated how the political issues that cannot be dissociated from a book dealing with Lebanon, are delicately used just as a background of the story, leaving the literary discourse untammed by the usual diatribes that unfortunatelly diminish considerably the quality of any work.