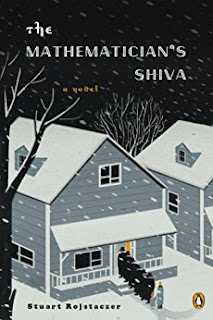 When a famous Jewish woman mathematician of Russian and Polish origin dies in the USA, her shiva - week of mourning according to the Jewish tradition - is attended by brilliant minds from all over the world. The reason why this Babel landed was not only to pay the well deserved honors to Rachela Karnokovitch - whose 'craziness was happily wed to her intellect' -, but also to check her progress in solving a once in a lifetime problem: Navier Stoker equation - which exists but was never actually solved.
As in many English books dealing with family stories of Jews from Soviet Russia, there are a couple of elements that are common to this debut novel: the respect towards the big Russian culture, particularly literature, the historical flashbacks of the communist bureaucracy and its innerent anti-Semitism, the strong connections to the language, and the constant allegiance to the holy food, that compared to the everyday scarcity from Mother Russia can be abundantly cooked and tasted. 'We live here, we are Jewish and we can usually pretend we are Americans, but when Death comes we might as well be in Moscow or Minsk'.
But this is only the canopy used to build up a very unique story, dealing with a family of mathematicians and their disfunctional yet loyal world. Because not exposed to the hard everyday shock of the live in the Soviet Union, Rachela's son, Sasha, has only a PhD in meteorology, and his academic career although noteworthy, is a disappointment for his family, in the same vein as his role as a son of such a prodigy mother can be a terrible weight for advancing his professional and personal life.

The book stands out for a couple of features. It is well written and actually it creates a story which has a pinch of mystery, although of a different nature: the search for the solution to the famous problem, including by bringing into the picture and careful investigation of the Polish speaking parrot Pascha, a companion of Rachela during her long hours of study at home. For the connoisseurs, mathematics can offer a delightful intellectual experience. It has plenty of intelligent humor and self-irony. It also tells the story of a brave woman scientist aware of her mission and dedicated enough to her gift to go elegantly straight forward through the limitations imposed on her gender.
My favorite angle of the story is that it makes science and especially mathematics, a tangible and life-related encounter. It talks about science without using a pretentious and putting-down kind of wording. Take, for instance, this beautiful description: 'Tornadoes are a good metaphor or how bad things happen in our lives. They build grom small disturbance that usually don't happen in our lives. They build from small disturbance that usually don't mean a thing and almost always dissipate. But somehow, one particular random bad event attract others, and all of them together grow and attract more nasty stuff. Once it gets up to a critical size, the odds of it growing even larger are no longer remote'.
I personally was a bit disappointed that sometimes many of the details of the story are just left in the air without being used further, but I suppose the story is supposed to end somehow and the more you talk the farther the end.
The Mathematicians's Shiva is a well-written and fascinating unique story. If you have a certain familiarity with mathematics and science in general, it is even more enjoyable.

This post contains affiliate links. At no cost to you, I earn a small commission if you decide to purchase the book. It doesn't affect the way you shop books, and it's a great way to support WildWritingLife blog.
Posted by WildWritingLife at 09 March