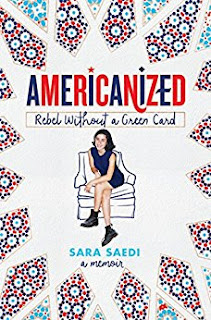 'The eighties weren't the most ideal time to be a Persian in America. With the hostage crisis still fresh in the country's minds, we were public enemies number one. The news footage of Iranians protesting in the streets, burning the American flag and screaming 'DEATH TO AMERICA', didn't really do much to bolster our image. And then came the Iran-Contra scandal, which was the vanilla ice cream on the poop pie. But my parents tried to teach us to ignore any negative perceptions of our homeland. We know the media didn't define our culture. What the news didn't sow was that we were a passionate people who loved art and music and poetry. A people who came up with any excuse to throw a party and danced with their hips and shoulders in full swing. And who, above all, put family before any thing'.
Americanized. Rebel Without a Green Card by Sara Saedi is a humorous, hilarious and honest memoir about life as illegal immigrants in the 1980s-1990s. Through stories that usually have a colourful language, she is sharing normal life story of any teenage - in America or elsewhere - except that her life was for a long while shadowed by the danger of being deported any time. Which didn't stop her from fully living the American dream, with all its dangerous excesses.
Although she left Iran at a very early age, the language, culture and history remained an important benchmark defining her identity, as in the case of many Persian expats in America. Her view on Iran and the sentimental relationship to the country is part of an identity which resists the test of political allegiances and stereotypes.
The ironic testimonies are in fact the best way in which serious struggles that almost all immigrant parents and their children cope with and therefore the book is an useful read to both children with an immigrant background and those in the country for over a generation. It helps to increase the tolerance and understanding of the everyday difficulties. 'Immigrant kids often feel like their parents will never understand what it's like to be a teenager in the States. They'll never fully comprehend what it's like to bounce back and forth between two worlds and two cultures without offending either side'.
Maybe the language will make it a bit difficult and non-recommended for a middle grader, but high-school kids are definitely a good audience for the book.

Rating: 4 stars
Disclaimer: Book offered by the publisher in exchange for an honest review
Posted by WildWritingLife at 10 February