The Mystery of Feelings: Ms. Ice Sandwich, by Mieko Kawakami 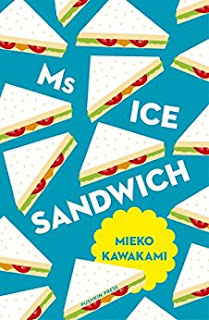 There is a special way in which most of the Japanese literature deals with feelings. Or how actually it rather avoids to express them in our usual, Western way of doing it: loudly, aggressively, showing off and through direct interaction with the object of desire or hate. In the case of all the Japanese authors I've read until now, both from the old and new generation, feelings are guesses, described, hidden as much as possible. You may dance out or cut your hair suddenly, but you will not talk about your feelings straight. You may decide to end up your poor life, but you don't keep talking and talking about it over and over again. You just do it.
Ms. Ice Sandwich by the young Japanese author Mieko Kawakami is a novella of a young boy falling in love with a strange looking lady selling sandwiches. His love is consumed by going there to see her every day, describing her to his grandmother who is in coma and also drawing her. If not an incident takes place in the middle of the story when other people are describing her - a quiet person, no smiles or no external manifestation of any kind - you might think that this lady with her blue eyelids doesn't exist at all. It seems she went through some plastic surgery which makes her look weird and possibly unmarrigeable. Or this is how his colleagues are describing her. But the young boy, the storyteller couldn't believe it, but he decides instead to give up the visits to the supermarkets where she sells. Meanwhile, he makes a portrait of her, as he sees her, with qualities attributed by his imagination too, with fresh memories of fairy tales. He is still not a young man, but not a child either, swimming without direction through the river border between the two worlds. When he finally addresses her the word, is before she is leaving for good, as she is about to get married. He gaves her his portrait. That's all.
The two main characters, the boy and the Ms. Ice Sandwich, do not have names. They are just characters. In Japan, there is the tradition of changing the name once someone is going through a different life stage. Both the boy and the Ms. are about to enter a new stage of their life. They are still wearing their old clothes of their previous lifestage, while embarking on new beginning.
The story is moving on slowly, smoothly and tender. No sentimentality or drama, just days after days going on. Until the story ends.
For me, it was a happy come back to the world of Japanese writings, that I will visit hopefully more often in the next weeks.

Rating: 4 stars
Disclaimer: Book offered by the publisher in exchange for an honest review
Posted by WildWritingLife at 10 February