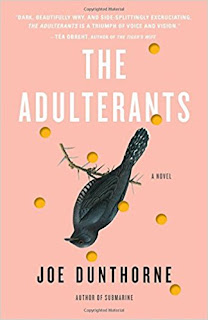 Growing up is hard, especially when it happens at the honorable age of 30+. Growing up means not only physically and emotionally, but also from the point of view of meeting certain social and status (old school) requirements.
The characters in The Adulterants by Joe Dunthorne are fine. Some work in tech journalism, or inherited some properties, or are kind of artists and creatives. Mostly over 30, not necessarily decided to have their own families. They are selfish in the mediocre way, not necessarily because they are busy traveling the world or writing books or building up a career. They just don't know for sure what to do with a new life in their own limited life. In the posh expensive London they can hardly afford a centrally-located place to rent and buying a property is almost impossible. They do have jobs but not sure if those jobs will cope with the sudden changes on the market.
The characters in The Adulterants, by Joe Dunthorne are shadows. Moving slowly from a party to another once in a while, filling up their duties and enjoying their kind of life. They are really fine.
And then, the civil disobedience took London by surprise in 2011. Angry people against the establishment, some of them those 'fine' people, put the beautiful city on fire. When you don't have nothing, you have nothing to lose. Another shock of wave for our millennial characters, because absurdly, they are part of a scenario they couldn't care less about only seconds before being themselves involved in some occurrences. Ray, the main character and the narrator of the story, will end up in prison, after being featured on a 'Shop a Looter' billboard, with his image caught on CCTV, while intruding the office of a real estate that failed to helped he and his wife Garthene to find the family house of their dreams.
Even though I related at a minimal level with the characters, what I really loved about this book is the language. Polished to obsession, elevated and persuasive in its own right. So bad that, as the characters themselves, is so disconnected from the surrouding reality.