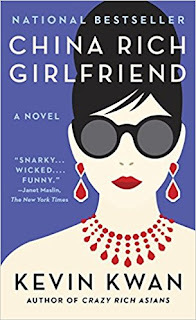 After reading Crazy Rich Asians and Rich People Problems, I was not sure if I can live without reading the second part of the trilogy, China Rich Girlfriend, but I was sure that sooner or later will give up and spend one day or so in the company of the special characters developed by Kevin Kwan.
From the point of view of the writing style and the literary skills, it was a time well spent. The more or less sympathetic long line of characters from the other books got more colour and even a bit of political background by adding a lot of characters from the New China: politicians with entrepreneur wives, Instagram and blogging stars with multi-billion accounts, shopping addicts closing and emptying the luxury brand and couture shops in Paris. Forget the Russian oligarchs, they are so passé and bourgeois, faced with their Asian tycoons counterparts.
A good, easy-going and often hilarious read of people with overinflated egos, living a glittering fake reality they created following their trips in the outside world of luxury. From private jets at the size of Air Force Once and a bit more to special assistants for dogs, you have all the symptoms shared among the characters of this book. I bet they are real, at least some of them.
The author also introduced a couple of dramatic elements which makes the read more interesting and entertaining, especially after being overwhelmend by fashion and interior design detailed descriptions (which are very illustrative, by the way). Also, psychological elements outlining the ways in which a new financial and economic status challenges personality are a good food for thought and add more interesting spices to the reading.
The book has plenty of characters to love and hate and pity - some of them at the same time, and it is far beyond your usual chick-lit read. The outrageous spending habits and hilarious behavior of the new China riches are authentic and make the book an interesting read not only for those intersted in gossips about celebrities and fashion icons and trend setters. It shows a part of China that probably only few people envisioned a couple of decades ago.
Once I finished the trilogy, I would be very curious to read something completely different by Kevin Kwan as he is such a talented writer that obviously can write about many more topics.