On Creativity and Genius 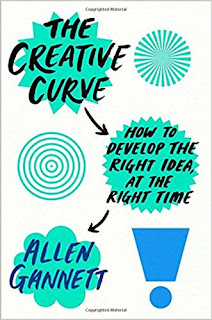 Once in a while I recall a discussion I had with my mother, with was a languages prodigy and a long-time teacher: she insisted there are people that are really gifted for languages, while I assumed that once you have the right mindset for learning it and also the practical need to do it, the change of learning language is equally distributed among humans. Many years after, I insist that all you need in order to learn a language is the will and the need and a lot of exercices practicing it.
Although it is approaching the issue of creativity as a pattern which has to do with a certain historical and social context of circumstances, Allen Gannett's The Creative Curve is rejecting the genius-driven idea of the intellectual elites and cultural achievements. Mozart worked a lot, Picasso also, Beatles did it too. Their success was a matter of being the right person at the right time.
The idea and the many premises developped in the book are not new at all. Many decades ago, the Historical French School of Annales sought for thought and ideas patterns which are creating the red thread of disparate historical events. Applied to the explanations from the book, it explains why certain songs, for instance, may look like successful overnight, when in fact it has to do with a certain pattern familiar to the public in a certain historical moment. The historicity of the moment when a certain idea emerges explains why not all new ideas are becoming instant success. It has to bring a new interpretation while maintaining the right balance with the ideas already accepted. The Harry Potter books, for instance, besides being the result of a systematic work and documentation and punctilious development of the literary structure, it also used elements of children books already present. The result and the following success were not a revolution, but a creative interpretation of expectations of the audience. And again, the lot of hard work, instead of a struck of a genial inspiration.
Although I personally agree with most ideas shared in the book and the examples are well chosen to explain the conclusion, I may still believe that in some cases, such as playing a musical instrument, you may need a pinch of so-called talent, besides thousands of hours of practice and dedication. I personally played piano for almost 10 years, and despite the fact that I reached a certain level of technical achievement, my basic interpretation was as impressive as the wood the piano was made of. My technical accuracy was not accompanied by what you usually need in order to impress your audience: the dedication and the talent that are not for everyone. Maybe I was in the wrong place, and in the wrong time, and obviously was missing any support group and professional support that are so important to live in the highest clouds of creativity - regardless the domain - as much as possible.
The Creative Curve is a book encouraging dedication and hard work and I am very much inclined to follow its advices.

Posted by WildWritingLife at 10 June