Journeys into Our Dark Sides: Eileen by Ottessa Moshfegh 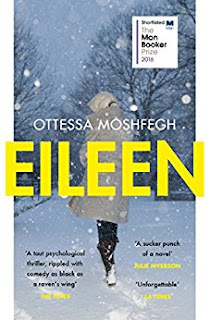 'Had I been born into a different family, I might have grown up to act and feel perfectly normal'.
Does it actually work like this in real life? Are family circumstances necessarily a strong influence into further personal and psychological developments? Isn't it only an easy way to blame the others for shortcomings that in fact might be avoided?
Eileen, with her ex-cop alcoholic father, is in his early 20s, working an office job in a correctional facility in X-ville. She has an anonymous isolated life, nurtured by fantasies about a guard she is stalking without any success. 'I'd never learned how to relate to people, much less how to speak up to myself', she says in a confession written many years after the events leading to her runaway from home and the beginning of a brand new life. Most of the time, she is invisible, with no chance of becoming a functional human being, with a real life.
It is not sure that she knows or want a real life either. An experience shoplifter, it is unclear what and why she may fit outside her correctional facility. Most probably she will become an alcoholic like her father or a depressed woman like her mother or both. She dreams meanwhile, unable to push herself to reach a better position socially or emotionally: 'My curiosity for stars is obvious: I wanted something to tell me my future was bright'.
Her future will change completely in only a matter of days, after the extravagant Rebecca made a spectacular entrance into the grey prison world. Manipulative, she is using the naive Eileen for her own aims and in the end, help her to escape the miserable life.
The mention of episodes from her future life are aimed at offering more information about her new life chances. From the literary point of videw, I've found the technique stereotypical. Most probably childless, Eileen ended up by accepting her feminity and becoming more or less like everyone else.
This slow paced, psychologically introspective novel sounds like an inquiry into the permeable limits between good and evil. Is evil able to nest even in the most innocent soul? Is evil in fact an acceptable part of being a human being and only the fear of repercursions or the luck of not being caught. Those poor beings from the prison for minors were not so lucky, with their crimes an outrage to their pure age.
The writing may create sometimes a suffocating and incongrous ambiance and the self-centered erratic Eileen doesn't make it into a favorite character. No character in this book is sympathetic, in fact. We may also keep in mind that the action takes place in the 1960s, with all what it means for a certain perception of women and their psychology in particular. Would be very curious to read more from Ottessa Moshfegh, as she is gently touching upon very dramatic topics with the strength of her writing. She has an unique voice I would love to follow in her other books.