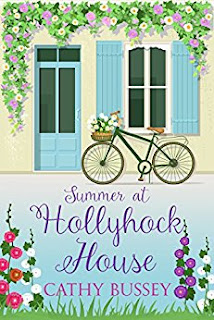 Life hasn't been too exciting lately for Faith. At 26, she has a boyfriend that bores her to tears and a job which is not too demanding either. She dreams of taking some classes for learning gardening, but there is no time or encouragement on behalf of her life partner.
After refusing her boyfriend's proposal, she decides to spend some time in the countryside, at her parents', catching up with her girlfriends. But she has a well-kept secret that no one knows and this secret has a name: Rik, which happens to also be around at the same time, after an absence of almost 9 years.
Slow paced, brought to life by complex characters exchanging elaborate dialogues, Summer at Hollyhock House is a well-written summer or weekend story read, about taking decisions, questioning relationships and falling in love again. Most of the action is going back and forth down on the memory's lane, with Faith recalling the moments that lead to the dramatic break up with Rik and her long heartbreak thereafter.
Although the story follows a frequent scenario - the escape back to the childhood place, after a big disappointment, job vacancy or dramatic, mostly sentimental event taking place in the big city - this story is filled with attractive actions and likeable characters making the story pleasant to the reader. However, it is good writing you are filling with your afternoon at the beach or elsewhere and therefore it is worth reading it. A simple story, with a happy ending and a moderate course of events. No glamour but down-to-earth characters, likeable for their realistic description. After a start which did not promise anything surprising in terms of narrativel, slowly slowly I got into the story and couldn't put it down until it ended. It was mostly due to the writing and the lively dialogue between the characters.
The end is predictable too, but somehow one may need predictable stories which are not too often happening in real non-literary life.

Rating: 4 stars
Disclaimer: Book offered by the publisher in exchange for an honest review
Posted by WildWritingLife at 03 September