In the Heart of the Cold War: Gleisdreieck Berlin 1981 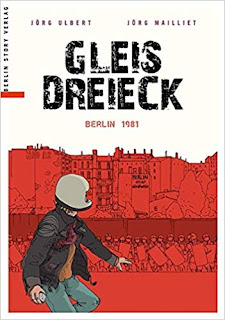 I wish I have more time to read graphic novels. Especially when it covers a topic I am well familiar with, the graphic illustration is a delight for both the eyes and the curious mind. Besides the classical children graphic novels, I am particularly interested in those with a political layer. As I noticed already in previous reviews, there are an important tool to create meaningful stories and bring near areas located far not only geographically, but from a while mentality standpoint.
However, a more than basic knowledge about a topic is necessary. Gleisdreieck. Berlin 1981 is about a policeman infiltrated into the anarchists from West Berlin and a terrorist returning to his comrades from Syria. Their ways predictably intertwin. But a lot is requested to know about the topic so dramatically escalated in the last decade of the Cold War: the KGB-East German connection with the anarchists movements (ecologist/against nuclear plants/occupy-type of actions); the generous help from former Nazis hidden in Syria and other Middle Eastern corners to the RAF militants, both as a training basis and a safe haven, as well as for help when counterfeit papers are needed; the lack of neutrality of most of the actors involved in the pro-socialist movements in the capitalist Germany.
With the dark background of the images - the architectural details deserve a thumb up, for the precision and sense of perspective - and the conflicted stories, the episodes of the novel unfold. Sometimes, you have a long succession of images, with only a couple of words at the end of the page. Enough to get into the ambiance of a place without thinking too much. You are just being drawn into the story and for a graphic novel it is a great achievement.
An interesting historical episode from the everyday life of the West Berlin citizens in 1981. Some bank robberies, street fights, Molotov cocktails and former RAF comrades. An useful lecture for anyone interested in the visual and literary transpositions of the Cold War.
The novel was initially published in French, by Des ronds dans l'O. A playlist with contemporary 'revolutionary' hits is also provided.