Mothers and Daughters of Halsey Street 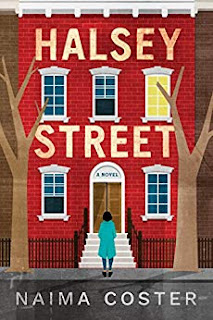 In the Bed-Stuy Brooklyn's neighborhood, Penélope is haunted by the failures of her own art life and her parents' break up. By nature a rebel without a cause, she rather prefers the accidental relationships to the long-term commitment because afraid of the disappointment of being left behind. An only child, with both her mother and father loving her, she is looking for something that didn't have yet but it's too lost in her failures to look for.
Halsey Street uses the sociological reality and media-hype about gentrification in Brookyln and generational shifts, especially in the predominantly non-white neighborhoods to create a story which moves by its simplicity, natural, non-sentimental way of expressing feelings and the relatively simple plot. The small human stories within the story are circling around the need to belong, either to a group, country, neighbourhood or social category. Such an inclination lives within the deep hidden layers of our self, surviving all our attempts to 'normality'.
We belong to a family, the racial and ethnic heritage of both our mother and father, that in addition instilled in us their wishes and failed dreams too.
Ralph, Penélope and Mireille are three particular destinies featured in this debut by Naima Coster, that may be some of the many residents of Bed-Stuy, children of children that once went to school hungry. If they were been to school at all. Themselves waiting for their sometimes first generation of American-born children to outperform personally and professionally. Such a pressure may get results but it can also create anything at all. Especially when their parents' dreams are breaking, like in the case of Ralph, whose music store, his greatest life achievement that fed his family for decades, become obsolte faced with the rabid competition of bio/eco stores.
The estranged relationship between Penélope and her fugitive mother Mireille, that escaped the bubble of the American dream to quietly enjoy the solitude in her native Dominican Republic, is deeply cruel and one of the most dramatic moments of the plot. Very often, it is what happened when unfiltered raw feelings are left free. Often, it is just how life really is.
The slow-paced stories told by the characters of Halsey Street require the attention of the reader for its genuine human simplicity and drama. Especially if you are interested in racial stories, this novel offers a direct literary approach, without subtelties or convoluted messages, just by using a natural art of storytelling.
Maybe I stumbled upon this book and appreciated it as I was in the mood for a micro-society focus and in a different set of personal and literary circumstances I would have been hesitant to finish it. However, I am glad I did, as it open up the window to a special writing style and approach.