The Desperate Search for The One 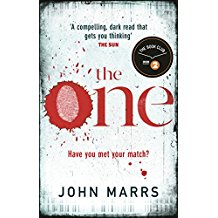 I am coming from a culture obsessed about matching, finding the right one, the one and only soul mate meant for me in the Heavenly Courts. Wouldn't it be so easy to find a marvelous mathematical - or other - solution which will just get that 'someone made for you, rather than leaving it to chance'?
The One, by John Marrs, was as hard to put down as my first encounter with this author a couple of months ago. Five people are followed through short, suspense-filled episodes, as they are discovering love following being matched via a scientific system Match Your DNA. Among them, the founder of this company, the success driven business woman Ellie. Their adventures finding and conquering the hearts of their matches are as weird as the idea in itself. Some of them are so strange to get match-trapped into getting inseminated with the sperm of a purposelly dead half, only because he was designated as such.
However, who would refuse the call of genetics when such an opportunity is offered? Nowadays, we are more than never potential victims of algorithms, scientific illusions of comfort and system aimed at being our life easier because a certain projection created that possibility. Playing Gd is easier than never but the results may still be the random choice of feelings or chemistry. Which no DNA-related match can't replace. Would it have been a different fate for each of the five matches if not a hack into the system have altered the results?
There are twists and changes of situations - and sometimes of minds too - on every pages, and Marrs succeeded in The One to build a great story of hope and deceit, with a lot of thriller and mystery outlines and surprising endings. You can't predict where everything is going to lead and this makes this book a perfect match for any lover of good books.