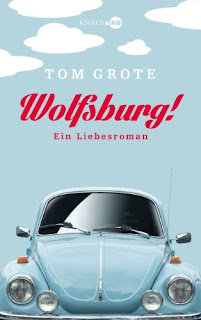 Jan loves Lina and for love he relocates from the bubbling Berlin to Wolfsburg. City of wolves, or what? Best known among the locals as 'Volkswagen' City or 'Autostadt', Wolfsburg is less than two hours away from the new capital city, offering a mix of anonymous late 1960s architecture - not good - and a luxurious Autocity area and a very interesting Museum of Science designed by the famous architect Zaha Hadid.
But the poor Jan, a freelancer artist of words, can hardly survive here, is often depressed during the long time when his girlfriend is at work, at a hospice. This is what the book is all about: coping with deep boredom in Wolfsburg. Meanwhile, Jan is often getting drunk, befriending a fireman, buying himself a car from a guy in love with Nana Mouskouri's music.
As a resident in Germany for 10 years and counting, I often noticed the supreme disgust of 'city people' when I mention some obscure countryside place when I am spending my weekend. Not impressed or deterred, I keep going on with my Germany off the beaten track agenda and happy with the discoveries. But the feeling that big cities with recognizable names - like Munich, Cologne, Berlin (not too many in fact) - are worth, and the rest - thousand of them - not, is real and Wolfsburg! breath this mindset.
Which is a pitty because although the book is well written and with nice language turns and plays - which does a lot of good to my German -, the plot doesn't exist, the characters are self-sufficient, that translates as completely not interesting, there are hilarious episodes but the book in its entirety is a book about nothing. The nothing is having a name: Wolfsburg! I bet that there are worse places to live in Germany and anywhere else, but still they can make it into a good story. This one is really missing the story point and I can only be sorry for it because there is not bad literary material.
Although I am not so knowledgeable in matters about contemporary German literature - work in process - I noticed a relative big gap between the entertainment books - well written but lacking completely any story point - and the very high end which features novels that are really impressive both in terms of language, plot construction and trendmill of ideas. Wolfsburg! belongs to the first category and although I am grateful for the language lessons self-taught through reading while commuting, I may rather make an effort and take more time to make more acquaintances among the contemporary elitist literature. Search in process for the best German contemporary novels.