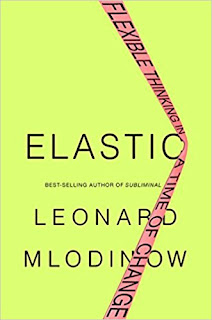 The late decade researches in the field of brain studies challenged the classical perspectives dramatically, revealing among others that far from being a amorphous mass that is progressively losing its flexibility the brain never ceases to change. The only condition is to put your brain at work and create or answer the opportunities of change offered by the environment.
A couple of years ago I've translated a very interesting study according to which you can learn foreign languages at an older age too, and in fact, such an opportunity may stop the deterioration of brain functions, among which those brought by Alzheimer's.
Elastic by Leonard Mlodinow focuses on what he calls our human 'desire to adapt, to explore and generate new ideas'. If you have a relatively minimal human experience, you might rather assume that in fact humans aren't so keen to change looking rather for stability and constance. However, epigenetics and genetics studies are partly confirming this theory, with a special gene DRD4, gene dopamin receptor which 'drives us to be discontended with the status quo, to seek the new and unfamiliar'.
As usual, the circumstances, life context and the cultural influences are at a great extent the main influences driving a brain towards a more 'elastic' status. 'An individual's general attitude toward novelty and change is affected by both nature and nurture - our genes and our environment'.
Although it is approaching a topic with a high scientific complexity, Leonard Mlodinow succeeds to make the topic understandable, carefully using easy examples from the everyday life many of them part of the larger researches outlining the advanced knowledge in the field of brain science.
A recommended read not only for those interested in the functioning of the brain, but also for business and communication experts, as it shows not so aparent ways in which the human mind can operate the nowadays environment facing the challenges of the e-revolution under way.

Rating: 4 stars
Disclaimer: Book offred by the publisher in exchange for an honest review
Posted by WildWritingLife at 17 February