Book Review: The Incendiaries by R.O.Kwon 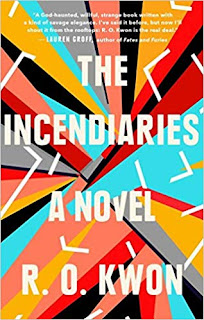 To enter the mind of a fanatic - regardless of the belief - you need a multi-layered, multi-disciplinary approach. Besides science and psychology, literature outlines the knowledge by its power to recall situations and encounters.
It sounds very dogmatic at the first sight, but for me, the best way to explore the diverse evolutions of fanaticism, is through stories and imagination. You need to make an effort of creativity, challenging your mind outside the comfort zone to switch minds.
In The Incendiaries, an incisive debut novel by R.O.Kwon, Phoebe, a young American-Korean woman enrolled in an elite university, is becoming a perpetrator of terrorist acts in the name of the ideology of a cult. The cult is founded by John Leal, an American that apparently spent some time in the North Korean gulag, witnessed the power of brainwashing that he is trying to use in the everyday practice of a Christian-centered cult. In between, there is Will, a former born-again that could not ignore his God dellusion. He tried to believed but couldn't assume the mindset fully so, he left. Phoebe is not a believer either, but she chose action as the only way to fuel the faith.
When you try in life to bust the illusion, you can move forward either by acknowledging that there is an illusion, either by blindly trying to convince the others of the truth of your illusion. Blindly but mostly through force.
The plot in itself is relatively simple and there is nothing to expect from the story. You bet from early on that something it's about to happen, something terrible, you only don't now when. But what makes this book beautiful in its own right is the art of writing. Words are skillfully called to create slow paced moments, with a colourful photographic strength and often an unbearable emotional weight.
The Incendiaries is a strong book, exploratory and intelligent, and it gives fanaticism a different angle of understanding.

Rating: 4 stars
Disclaimer: Book offered by the published in exchange for an honest review
Posted by WildWritingLife at 24 February