In the World of The Expatriates 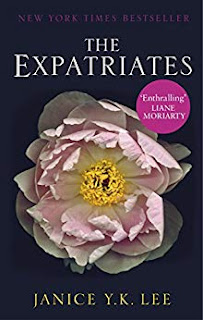 I don't remember when I haven't lived in my adult life as an expat. From Asia to the Middle East, to France, Switzerland or America and now, to Berlin, I've always look to create a nest far away from a home and an old country that are becoming more and more imaginary.
Mostly connecting with the English-speaking community, I've witnessed stories and episodes, from the everyday life to tragedies that can easily make it into a book. Or a drama-comedy.
The Expatriates by Janice Y.K.Lee excellently recreates the American life of high professionals and trailing wives in Hong Kong, adding both a pinch of irony and a pinch of empathy. Sex, cultural appropriation and race mix indeterminatly under the simplistic yet realistic label of 'Americans abroad'.
Out of the beehive of people coming and going, to work or on ready to go on vacation to exotic, cheap destination in Asia, the story of three women: Margaret, Hillary and Mercy, intertwin. Drama, hopes, abandonment, motherhood and tragic moments unites and separates the three, in a micro-cosmos where it is almost impossible to get lost, to be yourself and anonymous. In America is much easy, but Hong Kong is apparently small and your story and history are easily getting noticed, for good and for worse.
G, Margaret's son got lost a year ago during a trip to Korea aimed to reconnect her with her family origins, while Mercy was hired as a nanny. Mercy is a Columbia graduate, a success story of an immigrant Korean family, unable to put up together her personal and professional life. Hillary lost her husband who abandoned her suddenly for Mercy. Now, Mercy is pregnant with his child. Far from being (always) friends or sharing any empathy towards each other, the destinies of those women are here more driven into each other than it would have been back home.
All the three characters, especially Margaret and Mercy, are well defined and with a clear, memorable personality. Most of the other characters populating the story are too, which makes the author knowledgeable of human natures. The dialogues are interrupted back and forth by introspection which creates more depth and complex development to the story.
The story development keeps you alert and there are some elegant unexpected twists that may wake you up if too much immersed into the small gossips of the Anglos in Hong Kong.
However, what disappointed me greatly was the ending. A very happy sugary Korean drama style ending that brought a sarcastic grin on my face. It could have been any ending, after all, but that one is a bit too kitsch for my taste.
The book will be soon turned into an American drama series for web tv.