'My Year of Rest and Relaxation' 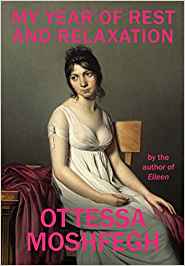 'I'm taking some time off. This is my year of rest and relaxation'.
I love this expression: 'rest and relaxation'. I use it several times the month maybe, when writing about wellness and wellbeing and a life of...well...'rest and relaxation'.
The character from latest Ottessa Moshfegh's book, an author I come across through Eileen, it taking this expression literally, by taking 12 months off life to rest and relax. Helped by a deadly cocktail of drugs - serioulsy, how much a human body can take, as I asked more than once following and counting the eventual qualitities of medicine ingurgitated that sooner or later the anti-hero will die after too much drug consumption - she is delved into deep sleep. She is rarely leaving her home and when she does consciously, she does it for a short ride to buy some coffee and fill the fridge.
Every month, she is visiting her strange therapist, for getting stronger drugs.
Once in a while her friend is coming buy and sometimes she is stalking her ex-boyfriend.
No feelings, no emotions, just memories and the need to sleep. And sleep.
I've been afraid a sleep a long time, as a way to shorten my life. Sleeping is like dying and I wanted to live my life in its fullest. Sleep was taking my away from life, love and books. I wanted to be present as much as possible.
The average woman character of My Year of Rest and Relaxation doesn't want to live. According to her own account, her previous life doesn't look much alive either. She has the money to survive the day, but is stuck somehow in some material possessions and memories of her parents. At a certain extent, she replicates the life of her own mother, who lost her life after too much drugs and alcohol.
Her encounters with sleep are a desperate effort to clean herself from this world, although there is nothing planned the day after the year is over. Most of her efforts are organised around her sleeping.
'I suppose a part of me wished that when I put my key in the door, it would magically open into a different apartment, a different life, a place so bright with joy and excitement that I'd be temporarily blinded when I first saw it'.
Nothing like that will happen and she is delving into every single day of the year with the hunger for...rest and relaxation.
The story is taking place in the narrator's mind and Ottessa Moshfegh succeeded to create both an interesting character and story that although is rarely taking any eventful turn, it keeps you connected to the very simple uneventful encounters. The words are modelled and growing up out of the story which is developing in the end as a beautiful non-figurative sculpture.
I don't like characters without features, I don't like women that only want to sleep and sleep and take drugs, but out of the many books I've read with an anti-hero woman character, this one is the strongest and complex one. She doesn't look for or finding herself, she doesn't do meditation or share mindful thoughts. She stays naked, all by herself, facing the non-sense of sleeping. And fully enyoying it.