Anatomy of a Lie 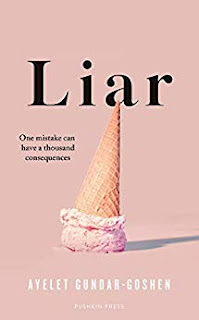 'What, you didn't read anything yet by Ayelet Gundar-Goshen?', is one of the questions I've often been welcomed by some of my bookish friends, which are in constant sync with the literary trends and trend setters in the part of the world to whom Goshen belongs to. Keen to finally fill the conversation gap, I've randomly picked up Liar - in the German translation by Helene Seidler, published in Switzerland - which I will find out later is her latest book.
A lonely 17-year old girl selling icecream during the summer to get some extra money accused of sexual assault an ex-reality show star. A lonely teen boy that happens to be in the store at the time accepts to cover her but not for free. Meanwhile, the girl is becoming fame overnight while the ex-star - who only assaulted her verbally - is almost one step away from spending a couple of good years in prison.
A trained psychologist, Gundar-Goshen doesn't write about the rape culture, sexual politics and not even approaches the Israeli politics in general - which are always a very tempting topic anyway. Her characters, all of them, actually, are living in the proximity of lies - white lies, big lies, survival lies, lies we tell to ourselves to survive, lies we tell to other people to survive. Nothing dramatic will happen in the end, as the life of the characters, as our everyday lives as well are often moving into grey areas where the lines between right and wrong, good and bad, victim and perpetrator are very fluid. Why are we driven to lie? Is truth not relevant for our life values and especially relationship to the others? What happens actually when a little white lie goes out of hand, first and foremost when there are other people and their destiny involved?
There are so many questions that keep running around the reader's head once the book is over. Any of the questions are openly stated into the book though. There are no moral judgments or condemnation either. All you have to do is to read this very simple everyday life story and use your critical reader mind to question not only the characters in the book, but also yourself.
As for me, I know for now that Ayelet Gundar-Goshen is on my list of readers to get to know better and another of her books is already on my writing desk.