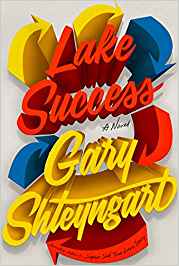 Some authors and books are simply not supposed to be a match. Like in the case of the encounters with humans, there are situations when the character feature of two humans are in conflict or leave each other completely indifferent. In the case of books, either the topic or the style or the writing in general do not resonate at all with the reader or even worse, makes the reader anxious and unhappy. Often, the best is to do not finish such a book, which happens once in a while in my reading life. Life is short enought to be wasted reading bad and/or unpleasant books.
However, in some cases, when not sure enough about my first impression, I rather prefer to give to the aithor one more chance. It might be that the topic didn't resonate or the writer was just going through a specific stage in his or her life when his writing was just evolving.
This happened to be recently with Gary Shteyngart. I tried Little Failure and didn't come along well. A memoir of Jewish immigration from Leningrad - Sankt Petersburg nowadays - to America, life adjustment and evolving of family relationships, it was the writing, not the topic that was not for me. It is hard to describe 'scientifically' such a mismatch, but it has to do with a certain writing flow and the ways in which a story is told - or failed to be told.
But wanted to give it one more chance, therefore I started Lake Success. Barry, a hedgefund manager with a taste for luxury watches, Jewish from an immigrant family (named as simple as Cohen) an autistic son and an Indian wife, lives in the time of Trump. Driven by absurd impulses, he is on a road trip on Greyhound to discover 'deep America', which is as absurd as the plan in itself. Altough most actions and dialogues are sliding into the awkward category. In between bus hoping when he is not getting into trouble, there are discussions about identity and morality and once in a while Trump and white supremacy too. But not the absurdity of the encounters bothered me, but the completely lack of direction. Yes, we are talking and complaining and we are writing about it and that's all. The characters are like completely emty emotionally and humanly, in a very autistic way, at the very extreme part of the spectrum. And America is the same. A good comparison which partly resonates with that awkward majority that brought Trump to power. There is a grain of truth in it, but for me, the whole storytelling doesn't resonate and it is simply a matter of literary preferences. It's a pitty, as there were so many topics that would have die to see developped but in a completely different way.
As in life, also with books some things are just not meant to be.