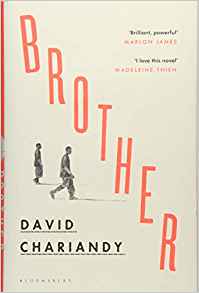 We, at least in Europe, we are used to portray Canada as a paradise of multiculturalism, featuring a perfect communication between different cultures, races and religions. However, although in theory and partly in practice, the situation might look qualitatively different than in America and even in Europe, the ethnic tensions and the race and social divide remains a reality of the everyday life.
Brother, by David Chariandy offers through a fine diagnosis of the inter-ethnic relations the view of a state-of-mind of the relationships between different groups, in the troubles years of 1990s, when Canada witnesses various ethnic riots in various multicultural suburbs.
A young with a Carribean background is mistakenly killed by the police. His brother is left with the memories of a life of growing up together with his sibling and with a mother devastated by the loss. The simple story is a pretext for a fine analysis of various small stories of other people living in the neighbourhood, about social mobility and the gaps between the expectations of the immigrant parents and the failures of the children that enjoyed a freedom and a a social comfort unknown to their 'homes'. Their case was part of the complex web of local stories about to fade away following the new waves of residents in what once used to be prohibited neighbourhoods. 'For these newer neighbours, there is always a story connected to Mother and me, a story made all the more frightening through each inventive retelling among neighbours'. It is a stors 'o a young man deeply ''troubles'' and a younger brother carrying ''history'' and of a mother showing now the creep of ''madness'''. Crime and food are attached to this Carribean identity which is not only carried away willingly by the local residents of no-go areas, but are also perpetuated by the outsiders, including the law enforcement representatives. The result, there is a dead end, which is impossible to escape.
Besides the many intersting sociological and cultural questions, it is the evocative writing which makes the story outstanding. Through the words, closed doors of the heart are open towards a better understanding of the world and human suffering.