'The President is Missing' 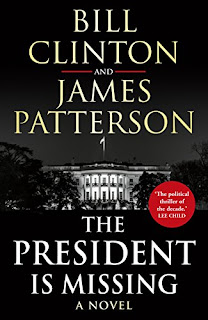 A retired Army general, US president Jonathan Duncan is facing a difficult moment for America: a deadly cyberterrorist attack is threatening the country. The countdown of the moment when 'Dark Ages' will take over USA starts, and a complex web of betrayal among the president's security cabinet and political and terrorist intrigues requires a short amount of time, and international political cooperation in order to succeed.
The goal of the terrorists 'was to cripple the United States'. Therefore, there is a race against the clock
The President is Missing is a novel written by the bestseller author James Patterson and the former US president Bill Clinton. I was curious to read it because of the possible 'realistic' feedback regarding the ways in which the presidential functions are operating provided by the former American president as well as for checking out Patterson, an author I did not have the chance yet to read.
Relatively slow paced - at least compared to usual fast-forward pace of the thrillers I am usually reading - the book covers rightly the technicalities both from the political and operational points of view of the function of the president, as from the technical aspects regarding the cyber attack that is supposed to bring what is called - probably easily using a Cold War distinction not too much useful nowadays - 'world's most powerful nation' into the Dark Ages. Snippers coming from corners of the world relatively - if not completely - unknown to the American public such as Balkans or Georgia or Abkhazia, Turkish cyber terrorists involved in coordinating 'Sons of Jihad', a president with fresh memories from his captivity in Iraq. Plus, some trustworthy elected representative which for very human personal reasons accepts openheartly to betray the country.
All the ingredients for a great unique story are there, but somehow the way in which the story is told and the outcome which is at a great extent predictable and not original doesn't answer my literary expectations. With a bit of originality and inspiration you can use common places for the latest political thrillers - the combination between militant Islam and cyber terrorism - and turn them into an exciting unique story but this is exactly what The President is Missing failed to provide, at least according to my taste.
For me, this book will be included in the category of 'those bestsellers that you can eventually skip next time'. Not all bestsellers are really worth reading, whatever how exciting their topic is and how famous literary or political stars the authors are.

Posted by WildWritingLife at 12 June