Short Stories from the Old and New Russia 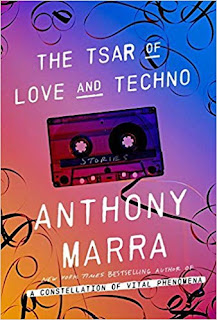 I am used to read novels or short stories about the Soviet and New Russian times written by authors with a certain Russian-speaking background. For instance, people that were born there or at least whose parents were, with the memories of the Gulag and the old Stalinist times still alive.
When I started to read the stories from The Tsar of Love and Techno, I was almost sure that it might be something of a non-literary nature that connects Anthony Marra to this complex cultural, social and historical context. The interwoven stories with characters that are dying or growing up in the Soviet times or are re-born in the Russia under oligarchs sound so authentic, with even the pace of the storytelling being told with that specific voice for the Russian literature.
It doesn't mean that Marra is completely foreign to this realm: he taught himself Russian and also visited the country. Among others, he was among the first foreign tourists to visit Chechnya after the war, a province which plays a significant role in many of the stories from The Tsar of Love and Techno.
The short stories are organised as short episodes from the life of characters that are coming up and again, in different stages of their personal story and on different epochs from Russia's history. Some are active ideologists in the time of Stalin and a living memory - with all the falsification that usually operates in the case of memories - in the time of the oligarchs. Some others are connected to their past - which again is the work of distorsions due to various interpretations and ideological manipulations - in a time when the left bombs from the time of the Chechen wars are fragile enough to blow into air any accidental trepasser.
The characters are diverse and recompose at a certain extent the distribution of the Russian society: the ex-ideologue, the soldier, the drug dealer, the ballerina, the diva, the cultural propagandist, the artist. Some of them changed roles from an era to another and they suit their new lives almost perfectly, although the differences are dramatic.
Not all stories are equal in terms of intensity but all contain a little dosis of interesting story that makes you curious to encounter a bit later, on another occasion, a couple of short stories later. And there is a complete detachment in telling the story, which avoids expectations and makes the writing flow, without tensions or extraordinary encounters. It is a curse and a blessing in such a choice. On one side, there is a certain monotony that might become a deterrent of keeping reading the book in one sitting. After all, there are short stories which means you can leave the book for a while and continue reading it later. The blessing is that you can observe the chain of events from afar, make jugments pro or against the characters and their actions. It is not the writer's task to take stances, but of the reader to utter intelligent observations.
Anthony Marra is clearly an author to follow and short stories might be a more often presence into my reading menu.