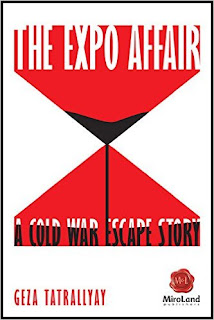 As a former member of another Japanese World Expo, but on a more recent date - 2015 - I still remember about the small diplomatic gossips and various human challenges that I encoutered during one full year of intensive Japanese-style hard, hard work. However, I was very far away from the complicated and tensionated ambiance Geza Tatrallyay is preseting in his memoir, The Expo Affair.
Born in Hungary and escaped with the family to Canada after the tragical outcome of the 1956 Hungarian Revolution, Tatrallyay plans to present his Cold War memories in several books, Expo Afair being the second in the series. It is a first person writing about his experiences during the time spent at Ontario Pavilion at Osaka 1970 World Expo. Compared to my own experience at the Aichi Expo 2015, not too many important things changed: lots of parties going on and on hosted by the Pavilions of the countries and regions represented, special housings created to host the representatives of the countries, restaurants hosted by pavilions where one can tastes various foods and local flavours, but also a lot of relationships in the making, many easily forgotten till the next party.
What I did not experience and I am deeply grateful for that, is the tension specific to the international times the Exhibition took place: the increasing problems in and protests against the Vietnam War, the Prague Revolution and the overpresent KGB. Assuming a neutral position, Japan preferred to offer equal representation to all countries presented, and to avoid any outburst of another hot conflict of the Cold War in Osaka. Thus, the immigration attempts of the Eastern residents were assumely discouraged, a position tacitly assumed by the US as well.
Trying to get a break from his unclear professional future, Geza goes to Japan to discover a new country, travel and enjoy life, but soon his thoughts will be took over by the beautiful Sasha, hostess at the Czechoslovak Pavilion. What in normal times it would have been easy and enjoyable, it reaches a high security level alert, after some of Sasha's colleagues, asked for help to defect to Canada. Plus, the relation was always under observation, as in general pure love between the two sides of the Iron Curtain was not encouraged. For state reasons though, the Soviet-shepperded secret services used to send beautiful ladies in Westerners beds.
The bohem - and very often playboy- Geza, together with his friend Cam, are working hard to find a solution, but when following the prime minister Trudeau green light, the girls are given a chance to make their way to freedom, the entire story is discovered and the girls gave up, being instead sent back to Czechoslovakia, as planned. There, their professional careers ended, part of the state punishment for attempting to defect. Was Sasha somehow involved in the leak? There is no answer offered, and we are left, as usual in the case of Cold War stories, with the suspicion only and many unanswered questions about the girls. In a world where having fun is a sin, the people are kept in fear and lack of trust to each other as an efficient way to maintain the dictatorship.
The lesson learned for Geza was a confirmation that "Canada stands for freedom, opportunity, progress and humanity" - a position relatively new in the diplomatic history of the country, as during WWII, the Canadians were no so keen to accept European refugees looking for refuge following the same need of escaping in-humanity. As someone born in a communist country, he also realizes how important it is to fight against opression: "Perhaps, because it had been so difficult to winl our liberty, we could better understand its value, to ourselves and to others".
The book is an easy lecture, perfect for the end of the week retreats. Although dangerous Russian spies are often present, and some other security challenges too, most of the book is focused on the relationship with Sasha, with spicey and sexy details shared. Once in a while, I found a bit annoying the sarcasm towards the local Japanese, but during my stay at Aichi I had encountered such attitudes quite often.
The abundance of red on the cover makes the impression dramatic, but the sand watch suits the race to get the girls out of the communist prison.
The book is available for pre-orders on Amazon.com, with release date 1st of April this year.
Disclaimer: I was offered the book to review via Netgalley.com, but the opininons are, as usual, my own.
Posted by WildWritingLife at 20 February