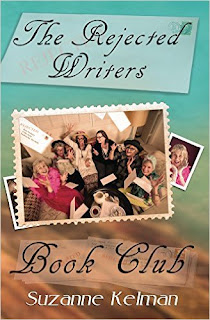 Before I started this book, I was about to think at least twice: Oh, just one of those books about book clubs, where - predominantly - women readers are meeting and discuss Jane Austen books. Nothing against book clubs, as I am myself a proud member of some, but the literature about them is quite repetitive and at the end of the story, boring.
But every single page of this book proved how wrong I was. Starting with the motto: "No man is a failure who has friends", it tells the adventurous stories of women part of a Rejected Writers Book Club. This unique literary idea - not sure if there is any such club in real life - means that respectable women writers of different ages from Southlea Bay get together to discuss their failed manuscripts and collect rejection letters. The group is about to go through a crisis when out of nowhere, Doris, the energical leader, receives an acceptance letter for her manuscript. The drama is about to follow: "I can't just go on being a rejected writer if I've been accepted. It's the rules". Right?
Janet Johnson, librarian at the local library is invited to be part of the group and from this moment on, her life is about to change. She is not only getting part of the gatherings - invitations she is too polite to reject - but she will play a big role in the big plans of the ladies travelling to San Franscisco for getting the manuscript out of publication. Besides the horror of being a published author, there is also something else which increases her panic. She included as part of the story some information found in a dairy of her aunt that once published will create a serious discomfort to her ailing mother, Grace. In fact, once they are away and the mother is left with the twins members of the club, unaware of the situation, they will read the stories found on a notebook belonging to the aunt, including the stories revealing some hidden lovers in Grace's life. Grace herself will make justice and will explain the real story at the end of the story, an episode which compared to the rest of the book is relatively weak from the literary point of view and also a bit unrealistic - like the rapid slipping between Douglas the Scottish lover who died and Will the American husband who was not dead.
The story has a happy end, with the ladies succeeding to get the manuscript back - the acceptance letter was a mistake, as the clumsy secretary Andrea mistaken Love in the forest - Doris' manuscript where alien abduction meets washing machine and Jane Austen - for Love for the forest, the manuscript the ecological aware publisher was interested to accept.
The art of writing is very entertaining, with many stories coordinated with high literary art, including that of a naughty raccoon and the very twin-pregnant perfectionist Janet's daughter. The road trip to San Francisco revealed the various personalities of the characters and bring a lot of interesting action to the story.
Overall, a very good writing experience, and most probably will be curious to read some continuation of the adventures of those ladies. For sure they are never boring.

Disclaimer: I was offered the book part of the NetGalley.com network, but the opinions are, as usual, my own.
Posted by WildWritingLife at 23 February