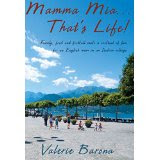 I spent most part of my adult life as an expat in different corners of the world and I am 100% sure that my life is not about to get settled down any time soon. But thanks to the technology and social networks and Internet, it is very hard to feel alone and connecting with other people, especially if you are English speaker, was never easier.
However, back in the 1970s, it was a different story, and I approached Valerie Barona's book with the curiosity of someone that wants to know about expat life back then. Barona, an Englishwoman, joined his husband in the tiny Italian village of Piussogna in 1977. With Italian language skills in the making and difficulties in adapting to the local market and sometimes, also to the exuberant and intrusive cultural habits, she is telling her story as an enumeration of events that followed her relocation: her first impressions, her husband's busy work, the birth of children, their vacations back in Dorset, the first contacts with the English speakers, the Foreign Club Expat Women, her first jobs. Do not expect anything very dramatic or some ups and downs or serious family misunderstandings that make the expat stories spicier. The story telling goes smoothly, with sociological and anthropological observations once in a while.
Most of this expat story is focused on the Piussogna and there are not too many trips outside the geographical area of Northern Italy where the village is situated.
Interestingly, there are a couple of advices and practices regarding the children upbringing in a bilingual family: 'As well as giving them an English upringing, I also hoped to install in them a love of the place where I was born'. Herself a teacher by education, Valerie tries to adapt to the challenges of a different teaching and educational systems which starts with a delayed diploma recognition. These were the times as nowadays, thanks to the various agreement within the EU countries, such challenges are mostly out of question.
What happened to her after so many years of life in Italy. She keps her foreigner essence: 'I was and would always be the Inglesina, or the English girl'. Which, in my opinion, it has a good part too, as after all, we should remain consistent to ourselves, despite acquiring new languages and getting familiar with different cultures.
From the point of the reading experiences, I found the pace too slow and too non-evenemential and author-focused but without too many noteworthy occurences taking place for pages. Especially the beginning of the book was quite difficult to swallow. It is the kind of book to read near the fire during one simple winter afternoon.
I liked the image from the cover, but the typeset is not the happiest choice and too much writing overcharges the space and diminishes the charm of the picture.

Disclaimer: I was offered the book for review part of the Netgalley.com choice of books, but the opinions are, as usual, my own.
Posted by WildWritingLife at 18 February